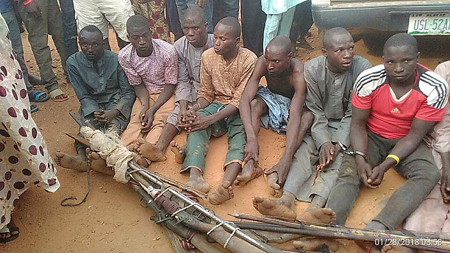 9 suspected herdsmen terrorizing residents of Akoko Edo Local Government area of Edo state have been apprehended while fleeing to Kaduna.

The suspects nabbed by a vigilance group at Igarra were said to have also attacked inhabitants of neighbouring communities.

Many people have been robbed and killed in the last two weeks in the local government.

Last Saturday, a driver employed by a private school was shot dead on Igarra– Auchi road. A farmer was robbed by the suspected herdsmen on Igarra–Okpe road and escaped into the bush.

At Igodi, a farmer identified as Jerome Ambrose, lost his right wrist while working on his farm after four suspected herdsmen attacked him.

The vice chairman of Arewa community in the locality is still battling for life after he suffered head injuries inflicted on him by the herdsmen.

He was attacked by suspected herdsmen, who called him to come and buy cows in the bush. His attackers used his phone to call contacts, demanding N30 million ransom.

Luck ran out on nine of the herdsmen, as members of a vigilance group and youths in Okpe waylaid the vehicle they were travelling in.

The vehicle, a Volkswagen, marked Kaduna MKA 555YJ, was intercepted on Igarra– Okpe road around 7am. The suspects were handed over to the police.

However some youths in the area besieged the police station to demand for jungle justice.

A witness said the youths wanted to use jungle justice because they were afraid that the police might release the herdsmen.

“The policemen usually mount checkpoints between Ago and Igarra. When we alerted them to the presence of herdsmen, they complained that they did not have enough petrol in their vehicle.

“It took the efforts of vigilance groups from Igarra and Okpe and other youths to pursue the herdsmen into the bush before they were apprehended yesterday in a vehicle heading for an undisclosed location.”

“Today is Igarra market day, but many people did not go to the market for fear of attacks. Even churches closed early because of fear. But luckily around 7am on Igarra-Okpe road, vigilance groups accosted herdsmen. They were apprehended in their vehicle with cutlasses, guns and charms. We are living in fear. A few days ago, they chopped off the hand of a farmer at Ojah. They attacked a cattle farmer, Hassan. The man died two days ago.

“Last week, the suspected herdsmen kidnapped three people from a mining site near Igarra. Up till now, their whereabouts are unknown. We appeal to the government and security agencies to rescue us.”