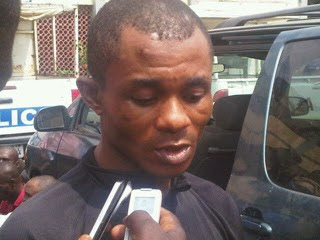 Nnamdi Okorie, a 28-year-old man who has been arrested each time he went for a robbery operation, has attributed his constant arrest to the fact that robbery was not his calling.

According to Okorie, who was arrested by the Delta State Police Command, said he had attempted to carry out three robbery operations and each time he had been arrested. He explained that no matter how painstaking he planned the operation, it would fail. This, he said, made him to realise that robbery was not his calling.

“I’m not cut out for robbery. It’s not in me. I need forgiveness. I will never go for robbery again! Each time I go for a robbery operation, I would be arrested. I have tried three times and failed three times.”

The suspect resigned himself to fate after he snatched a Toyota Highlander Jeep, along Asaba-Benin Expressway. The police said that Okorie, with his gang, attacked Chibuzor Nzerem of the Federal College of Education (Technical), Asaba.

The victim was attacked behind MTN office in the metropolis. After attacking the victim, the gang zoomed off through the expressway, by Onicha-Igbo.

The gang was intercepted by operatives of the Safer Highway Patrol Team, who mounted road blocks along the axis.

The Delta State Commissioner of Police, Zanna Ibrahim, who confirmed the incident, said that a report was received through the control room of the command’s headquarters in Asaba, that a victim was robbed of his Toyota Highlander Jeep, with registration number DSZ 705 KM. The victim told police that he was robbed by two armed men behind MTN office.

“On the strength of this, coupled with concerted efforts by the Safer Highway Patrol team at Onicha-Igbo, the snatched Toyota Highlander was intercepted along Asaba/ Benin Expressway way by Onicha-Igbo, with one occupant, Nnamdi Okorie.

The suspect was promptly arrested, while the Toyota Highlander Jeep was recovered. The suspect has confessed to the crime. Investigation is ongoing, while efforts to track down other fleeing gang members are on top gear.”

Okorie, who confessed to the crime, said that he regretted attempting robbery.

He pleaded for clemency, vowing to turn a new leaf in 2017.