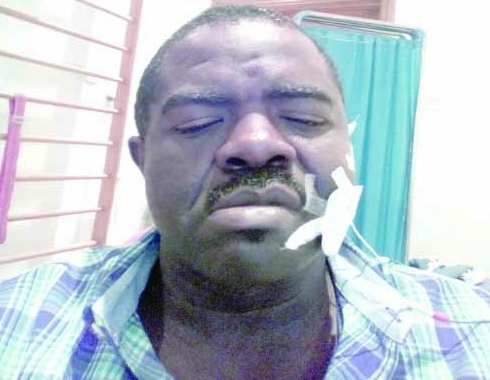 Since 2012, Lagos-based Igbo businessman, Kaire Nnamdi has been a sad, bitter man.

For this businessman and director of Olivine Nigeria Limited, a company in the importation business, life has been full of thorns and uncertainties following the theft of 10 of his containers loaded with goods from the Tin Can Island Port, Lagos.

Soon after the experience, he came down with a partial stroke, caused, he said, by the shock of losing the goods as well as the mounting demurrage on the loan he had obtained to finance the business.

Presently, Nnamdi can’t see with his right eye, even as his gait has been adversely affected by the paralysis. The cost of undergoing physiotherapy treatment, he said, has also impoverished him.

Nnamdi recalled that in 2011 he had placed an order for the importation of two sets of consignments containing unglazed ceramic floor tiles and toilet water closets with his shipper in Guangzhou, China.

He explained that due to the magnitude of the investment, he applied for a loan from his bank, with the intention to use the funds to clear the goods once the consignment was delivered in Nigeria.

When the goods arrived the Tin Can Island Port, he went to formally collect the loan, only to be told at the point of disbursement that his proposed collateral was officially unacceptable.

Nnamdi noted that aside from using part of the loan to clear the goods, he had also planned to use the loan to pay the sum of $13,000, which was the balance of the goods he imported from China, to the shipper’s agent to enable him take possession of his consignment.

After the bank’s rejection of his proposed collateral, he had to start looking for a new form of collateral, and it took him up to April 2012 to get one.

Nnamdi said that, by the time he was through with clearing just the first set of 10 containers and offsetting the demurrage incurred on them, the demurrage on the other set of containers had become so high that he had to get a waiver on them.

By 2013, when he was able to get a waiver and start processing documents to clear his goods, he discovered that the 10 remaining containers were no longer at the Tin Can Island Port.
Nnamdi said he then lodged a complaint at the Police Special Anti-Fraud Unit in Ikoyi, Lagos, after overcoming the initial shock Upon investigation, arrests were made. The police, he noted, obtained a confessional statement made by a staff of Skye Bank Plc, Eleganza branch, who reportedly connived with the shipper’s agent and another clearing agent to forge a document, with which the goods were cleared from the port.

“They processed what is called a ‘Form M’ on August 24, 2012, through a third party company known as Batway Nigeria Limited without my consent, and a fake risk assessment report was obtained.

It was with these, alongside a shipping document forged in my name, that they effected the duty payment and cleared the consignment out of the seaport. They confessed that Batway Nigeria Limited took delivery of the said 10 containers.

Usually, a ‘Form M’ is issued before importation, not after. They obtained the fake document without my consent or knowledge, using the bank as a platform,” he alleged.
Based on the investigation, his lawyer wrote a number of letters to the bank but got no reply.

One of the letters written by Abdulmalik Chambers, dated July 1, 2015, with the title “Very Urgent Complaint of Fraud, Conspiracy, Forgery, Abuse of Office and Demand for the Sum of 250 Million Naira Only Being Damages for Loss of Business,” prevailed on the bank to, within seven days, address the demands of his client, Nnamdi.

The letter partly noted: “Sir, the question one would readily ask here is whether the bank can open a ‘Form M’ in the name of our client through a third party without the knowledge and approval of our client, or can a bank open such document for a transaction where there is already an existing one?

“It is clear that your bank connived and conspired with Batway Nigeria Limited to steal our client’s containers. In view of the above, we are dismayed and irked by the action of your bank as it amounts to fraud, connivance and abuse of official powers, which has overreaching effects and inimical to the interest of our client.

“We have our client’s firm instruction to demand N250 million only, being compensation for the financial damages and embarrassment caused him within seven days of receipt of this letter.”
The solicitor, in the letter, also threatened to seek redress, which included, among other actions, to make a formal complaint to the anti-graft agencies, Bankers Committer, Central Bank of Nigeria (CBN) and the NDIC, if no attempt was made by the bank to formally issue a reply.

Nnamdi said that after waiting for a reply from the management of Skye Bank, he engaged another solicitor, who wrote the bank another letter.
The letter written by Chronicles Solicitors and dated August 24, 2015, with the title “RE: Unauthorised Transaction, Fraud, Conspiracy, Forgery and Demand for Payment of Damages in the Sum of 250 Million Naira Only,” reiterated that it was unethical and unlawful for the bank to open another ‘Form M’ in the name of their client.

The letter read in part: “It is so shocking and disappointing that despite the various complaints and letters by our client, the officials of your bank have refused to take necessary action to retrieve the goods from the said Batway Nigeria Limited. This is irrespective of the fact that your bank representatives are responsible for the fraudulent act of carrying out such a transaction.

“We strongly believe that this act sends a signal that the bank is wholly involved in this act of scam, falsification and stealing.
“In view of this, we have our clients’ instructions to demand the payment of the sum of 250 million naira only as damages for the great setback and loss suffered by our client’s business and on his health.”
Nnamdi noted that after waiting long for the bank’s reply, his lawyers took the matter before the Alternative Dispute Resolution Court, where another letter was written, asking the bank to state why disciplinary actions should not be taken against it.

“It was at that point that the bank responded in December 2015, claiming that they were just getting to know about the matter for the first time. They then requested for the names of the staff invited by the police or, in the alternative, that we should send them the police report,” he said.

In the letter dated December 16, 2015, the bank, through its legal department, explained that the management was just being aware of the matter, claiming that they had not been able to trace the matter to any of their staff.

“Please, furnish us with the name of the staff involved or the names of the representatives of the bank who visited or responded to your complaints at the Nigeria Police, Milverton, Ikoyi, in connection with this matter. You may also furnish us with any document from the bank in relation to this matter or any police invitation referred to. This is to enable us know the bank staff involved, get proper information on the subject, submit to mediation and file our statement of response accordingly,” the letter stated.

The bank declared that it was willing to resolve all disputes amicably based on its zero tolerance for fraudulent conduct.
A distraught Nnamdi said since the bank wrote his lawyer in December 2015, nothing had been done. He further lamented that, daily, the interest on the loan he took to import the goods increases, such that it is now N8 million.

“All I want is for justice to be done in this case. I am appealing to the relevant authorities to intervene and prevail on the management of Skye Bank to pay me the damages requested through my lawyer. My health is failing and I need to get treatment. The bank provided the platform through which my 10 containers were illegally cleared with falsified documents from the port,” Nnamdi said.

Reacting to the allegation through a text message, Mr. Rasheed Bolarinwa, head, Corporate Communications, Skye Bank, denied any complicity by his organisation in the alleged fraudulent transaction. He said the bank’s legal department had responded appropriately to the letters sent by Chronicles Solicitors, the law firm engaged by Olivine Nigeria Limited, since November 29, 2016, after series of meetings and independent investigations.

Bolarinwa explained that the bank only processed ‘Form M’ on the request of Bathway Nigeria Limited, after relevant documents were produced, adding that the bank only dealt with documentation in the processing of the f’Form M’ and was not actively involved in any clearing and forwarding process.

“Therefore, the bank denies any liability for any loss suffered by the complainant client in the subject transaction or any alleged theft and therefore, refuse the demand of the complainant,” he said.