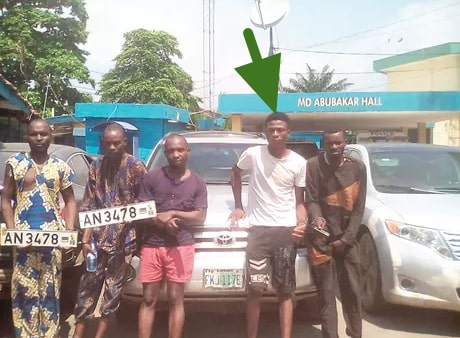 John Godwin, a 30-year-old cross-border robbery suspect has told operatives of the Zonal Intervention Squad attached to Zone 2 Command that he was arrested because he forgot to recite Psalms 121 before going for the operation.

Godwin, who looked dejected, said it was because God wanted the police to arrest him that he forgot to the read Psalms 121 on the fateful day when he and gang members were going for the robbery operation.

Four other suspects – Solomon Adeniji (27), Tosin Adeoye (25) and two nationals of Republic of Benin, Adewale Adebolaji (45) and Moyori Sule (42) – were arrested alongside with Godwin.

The Zonal Police Public Relations Officer (ZPPRO), CSP Dolapo Badmos, said the suspects used to snatch vehicles in Nigeria and drove them to the neighbouring Benin Republic and handed over to a receiver identified only as Alhaji.

It was learnt that Godwin was a former convict.

Godwin said it was his friend, Auwa, who sent his phone contact to the said Alhaji, who then invited him to Cotonou, Republic of Benin, for discussion.

He said: “I was once sent to Ibara Prison in Abeokuta for stealing something at a market in Abeokuta. It was in the prison that I came across Tosin. It was also Alhaji who sent my phone number to Solomon.

“My plan was not to go back to crime when I came back from prison. I did not have money to take care of myself that was why I went back. But later I told myself robbery is not best option for me because my parents told me when I was born a pastor prophesied that I would become a pastor. Fortunately, when I was in the prison I used to preach and pray with my colleagues. It is the devil that drove me to crime.

“Whenever we are going on operation, I usually read Psalms 121. I believe reading the Psalms would give me protection throughout the operation period. On the fateful day I was arrested I forgot to read the Psalms before leaving home. I believe God wanted the police to arrest me so as to quit robbery.”

The two foreigners, who spoke with our correspondent, also said it was the same Alhaji who co-opted them into the robbery gang.

According to them, their own role was to change the number plates of the stolen cars from Nigeria to that of the Republic of Benin and then drove down to Cotonou.

The ZPPRO, Badmos, who paraded the suspects yesterday, said the Assistant Inspector General of Police (AIG), Ibrahim Adamu, in charge of the zone, had directed intensive investigation into the case.

She, however, said the suspects would be charged to court after completion of the investigation.

Adeniji, who is an indigene of Abeokuta, said he was recruited into the car-snatching gang when the Nigeria Customs Service stopped them from smuggling rice from Republic of Benin to Nigeria.

He said: “Anytime we want to snatch cars, we go round Sango, Ifo, Ilogbo and its environs. The receiver in Republic of Benin has instructed us to always come with Toyota brands.

“On Saturday, two weeks ago, my gang members and I went to rob the owner of a Toyota Venza at his house at Ilogbo area. When we got there, the occupants of the house were planning to sleep. I was the one who scaled the fence of the house and opened the gate for my members who were outside.”

Adeniji claimed that it was Alhaji who provided them with the guns they were using for their operation.

He said: “I did not know Alhaji before; it was a friend of mine who introduced me to him. When I met him, he asked me if I could drive.

“When I told Alhaji I knew how to drive, he then invited me to Benin Republic where he asked me to drink water from a calabash. After I drank the water, he said I had sworn to an oath and I had automatically come under his control and whatever he asked me to do I have to do it. That was how I became a member of the gang.

“My first operation was the Toyota Venza car we robbed from the owner in his house. I regretted my action. I don’t know how my parents and my wife would feel seeing me in this situation.”

On his own, Adeoye said it was financial problem that led him to join the gang after he was released from Ibara Prison.

He said: “When I had issue with my landlord, I was charged to court and remanded in prison. It was inside the prison that I came across Godwin and we exchanged phone contacts. When we both came out of the prison, we went our separate ways. We only met again recently at a Point of Service (POS) machine when Godwin wanted to withdraw money.

“From there we exchanged phone contacts again and became friends. A few weeks later, he called me that he had a deal for me; that we were travelling to Republic of Benin. When we got to Alhaji’s house in Cotonou, he took us to somewhere and asked me to drink water. After I drank it, he said whatever he wanted me to do I must do it for him.”

Adeoye added that Alhaji then presented two guns to him and told him and Godwin to proceed to Nigeria and steal Toyota cars for him.

According to him, once they steal and drive any car to the border, some people will come and take it from them.

The suspect added that it was those people who would drive the car to Alhaji’s house.

He said: “When I asked Alhaji how much he was going to be paying me for bringing the cars to him, he responded that I didn’t know him. He promised to pay me handsomely for each car. That was how I started the operation. We were arrested the day we were supposed to take the Toyota Venza and Honda Crosstour to him. We had an encounter with the police at Imeko, abandoned the cars and we ran away.

“We were later arrested at Abeokuta when we snatched another Toyota Highlander Jeep. It was then the policemen knew we were the ones who escaped from them at Imeko area of the state. I am seriously in pains now.”