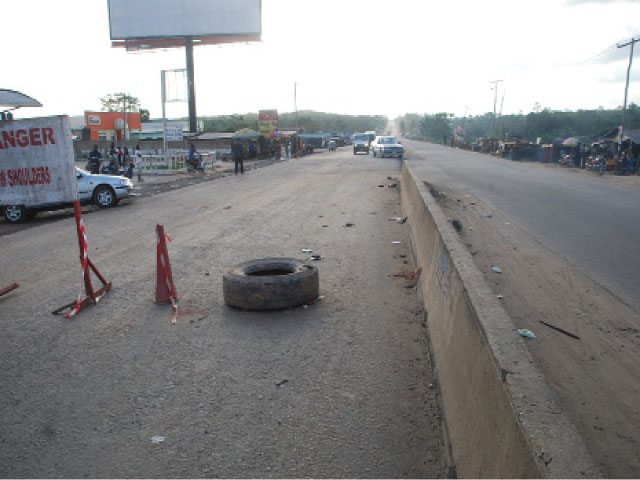 Over 15 buses carrying passengers travelling to their towns to celebrate Christmas and the New Year were attacked this morning by armed robbers around the Federal Road Maintenance Agency, FERMA, office, Mobalufon Junction, Ijebu-Ode and Ijagun, close to Tai Solarin University of Education, TASUED gate along the Benin Sagamu expressway, Ogun State. naijagists.com

The travellers were mostly Igbo who left Lagos early today. The robbers collected their bags, handsets, money and other valuables. naijagists.com

When journalists visited the scene, the victims lamented their plight and thanked God that they were not killed. Some of the travellers were seen walking to neighbouring towns like Egbe, Moraika, Iken-Ogbo and Ijebu-Ode.

One of the victims who identified himself as Emeka, a POP (plaster of paris) dealer at Jibowu, Lagos, explained that the robbers capitalised on the gridlock on the expressway to raid their buses.

“It was a nasty experience. The boys were too many. They attacked buses and ransacked them, taking away our bags, money, handsets, chains and all they could lay their hands on. They attacked all the passengers in my own bus. I am stranded. I don’t know what to do,” Emeka lamented.

Another victim, Mrs. Agnes Nwadioba who was travelling with her three children disclosed that the robbers dispossessed her of everything. “Look, my brother, I don’t want to talk much. You can see that I am distressed. I don’t know where to go with my children. I am helpless. I need help. Government should come and help me,” she cried.

When told that she was talking to a journalist who will help publish her plight, she opened up: “Please, help me tell the government that I need help. They snatched my bag and collected everything on me. I don’t know what to do. Ogun State government should assist us. I will never travel by night again. This is my third experience this year alone.”

Another victim who identified himself as Zico claimed the robbers collected over N300,000 from him. “They’ve taken my entire savings for the year. They didn’t show us mercy at all. They attacked and beat people mercilessly. The money I want to use to enjoy myself in the village has been taken away. Dis country na wa,” he lamented.

“The robbers are young boys. I believe that they are boys from this area who pretended to be hawking goods on the road. Some of them conspired with the robbers to snatch our goods. They also alerted the robbers when the police came and they ran away,” he added.

He called on the government to send more policemen to the expressway to curtail the activities of the hoodlums.

It was gathered that attacks by men of the underworld on travellers on the expressway had increased in recent times.