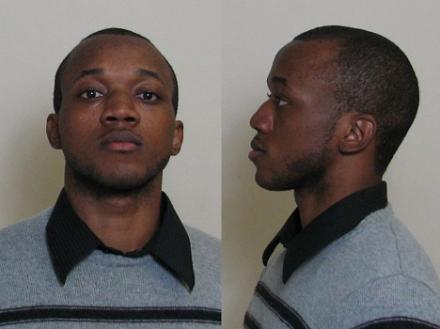 Olutosin Oduwole, A Nigerian man, 26 years old has been sentenced to 5 years in prison in Madison County, Il for sending a letter to prosecutors demanding money and threatening a Virginia Tech-like killing spree. naijagists.com

A jury convicted the former Southern Illinois University student in October of attempting to make a terrorist threat and unauthorized possession or storage of a weapon.

The judge sided with jurors in dismissing Oduwole’s claim that he was an aspiring rapper, and that the threatening words were innocent lyrical musings. He was sentenced to five years on the threat charge and a year on the weapons charge to be served concurrently.
The threat note was found in Tosin’s abandoned car by cops in July 2007, just a few months after the Virginia Tech massacre. The writing demanded payment to a PayPal account, threatening “if this account doesn’t reach $50,000 in the next 7 days then a murderous rampage similar to the VT shooting will occur at another highly populated university. THIS IS NOT A JOKE!

The aspiring rapper insisted in court that he “did not mean to incite fear. That was never my intention. That is not my character.” But he failed to convince the court the writing was innocent lyrics and other musings. Also, unfortunately for him, when they searched his on-campus dorm when he was arrested, cops found a loaded gun.

God have mercy what’s going on with people these days ! This is awkward