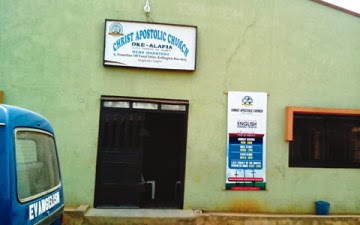 According to the Metro, the dare devils who operated for about 20 minutes, reportedly attempted to rape some female church members before leaving the church premises.

The armed robbers came at about 2 am on Friday morning as over 450 church members were engrossed in a prayer service.

A member of the church, who craved anonymity, said some of the members had observed a strange man making phone calls while the vigil was on.

He said, “The vigil actually started around 12 midnight. Some of us observed a man who came in around 1.30am. He was seated in the women’s section. About four persons tried persuading him to change seat, including the pastor, but he refused. So they left him.

“I observed him going out several times to make phone calls. At about 2am, I overheard him saying, ‘start coming, they are praying’. Few minutes later, I heard a gunshot.”

The head usher of the church was said to have been shot at close range, when he tried closing the door against the robbers, who he originally thought were arriving late for the programme.

The bullet was said to have shattered the glass at the entrance, and landed on the pulpit.

When the gun men got in, the church members were said to have been ordered to lie face down, while they started ransacking them.

One of the church leaders said, “They positioned themselves at the church’s major entrances. They collected money, phones and recharge cards. They started shouting, ‘where is your pastor?’ They took the church offering and wanted to rape some of our women. In the 20 years of my being in the ministry, I have never seen such effrontery before.”

Our correspondent gathered that the robbers, however, did not know that there were two other exit doors in the church.

The pastor was said to have sneaked out through the exit and dodged behind a window, where he viewed everything going on.

It was learnt that the gang leader, who wore a mask, suddenly became angry and started arguing with a member of the gang over a phone that was snatched from one of the church members.

The source said, “It must have been God working at that point. During the argument, this young man suddenly pulled off his mask and started fighting the other robber. They had a heated argument over a phone they had just snatched without knowing that the pastor was looking at them.”

PUNCH Metro gathered that the pastor of the church alerted the police who arrived at the scene just after the robbers left.

He said, “Apart from me, there were three other people who saw him. A particular member of the church even told us that he was the one who grabbed her phone while the robbers were stealing items. He wanted to follow the robbers when they were escaping, but we held him till the police arrived.”

He was handed over to the Ojokoro Police Division for interrogation. He was said to have aided the police in apprehending the other robbers.

Our correspondent gathered from residents of the area that the same gang of robbers had been terrorising the area for a long time.

A resident, who did not want his name mentioned for security purpose said, “After they left CAC that day, they robbed in about eight other streets – Baruwa, Tebun Fagbemi, Sunday Fadipe, Idowu Oya, Ayobola, Balogun, Alhaji SL and Taibat Banire Estate.”

Investigations by PUNCH Metro revealed that the gang leader, who led the church operation and angrily pulled off his mask, was the son of a traditional ruler.

Our correspondent gathered that the young man, identified simply as Ade, had been arrested, but there had been high-powered influences seeking his release from police custody.

The pastor of the church, who identified him, was said to be under pressure to withdraw his incriminating statement from the police.

The residents said they were apprehensive as the state command’s authorities had withdrawn the matter from the police team originally handling it at the Special Anti-Robbery Squad.

When contacted, the Lagos State Police Public Relations Officer, Ngozi Braide, said the matter was being investigated at SARS.

Braide said, “The incident took place around 2am and some people were arrested around 4am. The matter is currently under investigation and the suspects, including the son of the traditional ruler, are in police custody.

“It will, however, be unreasonable for anyone to be apprehensive and insinuate things against the the command’s authorities in a case in which they have no interest. Justice is what we stand for and justice is what we are going to do in this matter.”