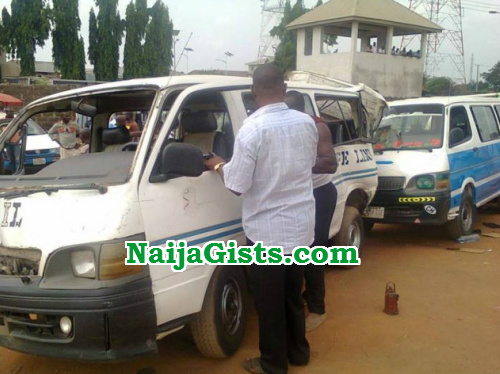 Yesterday was a terrible day for many passengers travelling in a popular transport vehicle plying Onitsha-Awka area of Anambra State, as two dare devils who boarded the bus from Onitsha attacked them half way into their journey and took away their belongings.

One of the victims said the robbers stopped the vehicle between Abbah and Igbariam junctions.

Another victim, Andy Okonkwo said one of the robbers was sitting infront of the vehicle while another was at the back.

The robbers reportedly ordered the driver to park by the side of the Enugu-Onitsha Expressway.

“As we were being robbed, vehicles were passing by, but they did not know that we were in danger and were losing our money and other items to the robbers.

“We even waved a passing police vehicle to stop, but they failed to stop and drove past us.

“Many of us lost various sums of money to them in the attack which lasted only a few minuets and after robbing us, they ran into the bush.

“I pleaded with them to take the money they saw on me, but to release to me the documents which I was travelling with to Awka and I am glad they did.”

The victim called on the police to conduct regular checks on vehicles and passengers on the road and advise transporters to insist on checking the passengers and their luggage before taking off from their loading point.

“If the transporters had checked the passengers at Onitsha, those armed robbers would have been arrested,” he said.

The robbery has been reported to Nteje police station.

Continue Reading
You may also like...
Related Topics:robbery inside bus onitsha