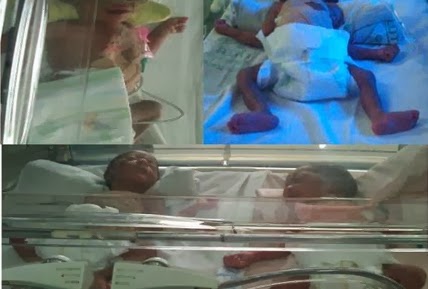 They were expecting a baby and that should be no problem — by their calculations.

Mr Kehinde Tijani and his wife, Grace, who were blessed with quadruplets on October 1 at the Lagos University Teaching Hospital (LUTH), are troubled. They do not know how to stop their bundles of joy from turning into source of dispair.

The family is in dire straits because they fear they won’t be able to nurture their bundles of joy.

Tijani, a Lagos driver earning N35,000 monthly, said: “We thought the pregnancy would produce a baby, unknown to us that they would be four, in addition to the three we already have.”

The 44-year-old, who hails from Akitan in Oyo State, told The Nation that his family lives in a one-room apartment at Ajangbadi, on the outskirts of Lagos.

His wife, who is still at the maternity ward of LUTH, said: “When I first learnt that I was carrying four babies, I became sad but my husband said we can’t question God.”

She said people thought she had an In-Vitro Fertilisation (IVF) – artificial insemination, adding: “I didn’t even know what IVF was until I got to the hospital. It was God who made it happen. I conceived like the normal ones I had in the past. I never thought I had more than one baby. In fact, when I had a scan at Ajangbadi (a Lagos suburb), doctors said I had fibroid. This was before the doctor said I had five babies; one was aborted. This scared me, but my husband was supportive.”

Grace, 37, who hails from Delta State, recounting her pregnancy experience, said: “I also suffered from anaemia, dizziness and sleeplessness, especially at night. It was tough keeping the pregnancy, especially with the chest pain, heavy breathing and loss of appetite that I had to contend with. This was why my husband brought me to LUTH . I was admitted in July and I have been here for three and a half months.”

“We can’t celebrate their birth properly because we are yet to pay the hospital bill,” the mother added.

The parents, who live at 22, Dabatapa Street, Ajangbadi Jakande, Badagry, Lagos, are pleading with well-meaning people, companies and governments to support them to be able to nurse their babies.