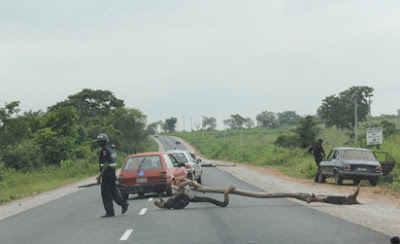 A man and his wife were found dead in the wee hours of today in Benin city Edo state Nigeria.

The attack which happened about 5am on Idemudia Street off Sokponba killed a man and his wife, a fish seller.

The unknown attackers suspected to be armed robbers stabbed the woman and her husband several times, resulting in the death of the woman at the spot while the husband allegedly died a few hours after at a private medical facility where he was rushed to for treatment.

‎Family sources had it that the husband was accompanying his wife, a fish seller, to the park for transportation of her goods to the village market when they were attacked.

The robbers were said to have demanded money from them after accosting them and resorted to inflicting injuries on them when the victims could not provide any money.

The woman died on the spot after her intestines fell out of her stomach following the gruesome stabbing attack.