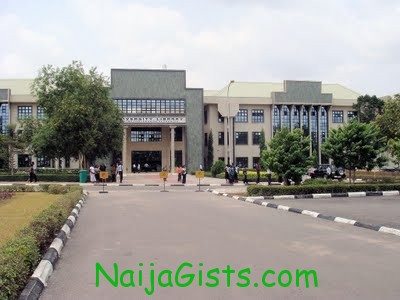 According to witnesses, the robbers went to Zenith and WEMA bank situated within the campus and shot sporadically to scare people away.

The shooting caused panic among students and other people within the campus.

Our correspondent gathered from an eyewitness that the robbers came with dynamite, rocket launchers and sub-machine guns.

They formed groups and broke into the banking halls to carry out their operation simultaneously.

A staff of one of the affected banks, Zenith, confirmed the incident to our correspondent on phone, expressing shock at the attack.

“It is an unbelievable experience, I don’t know how the boys came in. They carried big rocket launchers and dynamite. Before anyone knew what was happening, they swooped on us and asked all of us to lie down. One of them even slapped me because I wanted to look at his face. I cannot say the actual amount they carted away, but a rough estimate will be millions of naira,” the staff stated.

When our correspondent contacted one of the staff of the institution, Mr Dotun Oduroye, who heads the Technical Department, he confirmed the attack and stated that no student was hit by stray bullet, contrary to rumours that some students were hit.

According to Oduroye, “the robbers came in about an hour ago and they were with sophisticated weapons like dynamites and rockets. They were shooting in the air and two banks, Oceanic and WEMA banks were attacked. None of the students was hit by the bullet, it was only the shock that gripped many of them. But we thank God that it was just a shock.”

Our correspondent gathered that the robbers escaped through the express road and headed toward Ijebu Ode -Odogbolu route, still shooting as they fled.

Meanwhile, all banks in Ijebu Ode, Ijebu Igbo, Ago Iwoye and some neighboring towns including Sagamu have remained shut since Monday in the aftermath of the attack by armed robbers last week on two banks in Ijebu Imushin and Ijebu Igbo.

During last week’s operation, the robbers raided Sapida Microfinance bank in Ijebu Imushin and WEMA Bank, the only bank that has been operating in Ijebu Igbo in the last one year, and carted away an undisclosed amount of money.

During the Ijebu Imushin raid, two persons were hit by bullets and they were rushed to the General Hospital in Ijebu Ode. One of them later died during the weekend while the other one was reported to have been discharged yesterday.

A police source from Sagamu Divisional Headquarters confirmed the attack to our correspondent and said they are on the trail of the robbers.

As at the time of filing this report, many of the students were seen making frantic efforts to get across to their parents on phone.

They declined to speak with our correspondent.