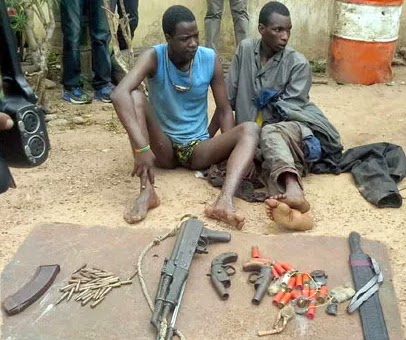 4 members of an international robbery gang suspected to be from Ghana were yesterday shot dead by police in Abeokuta, Ogun State capital. The State Anti-Robbery Squad (SARS) men who carried out the operation also arrested two other members of the gang who were seriously injured during a botched attempt on a bureau de change office in Itoku, Abeokuta.

The gang which fell into the trap set by the police was said to have attempted to rob the forex operators before they met their waterloo. Parading two of the suspects, Adamu Bamako and Ibrahim Tanko, who were injured during the shoot-out, the state police spokesman, Muyiwa Adejobi, described the suspects as cross-border bandits based in Ghana.

Adejobi, a Deputy Superintendent of Police, described the gang as notorious included nationalities of West African countries who invade Nigeria to commit crimes. He confirmed that the men of the SARS foiled the planned attack. He said the SARS operatives had been working on intelligence on the activities of the notorious cross-border ‎gang who had constituted nuisance to the state, noting that during the exchange of fire, a senior member of SARS was injured and has been treated.

He commended the people of the state for sharing information with the command. The command lauded SARS men for their efforts at keeping criminals at bay and appealed to them to sustain their efforts.