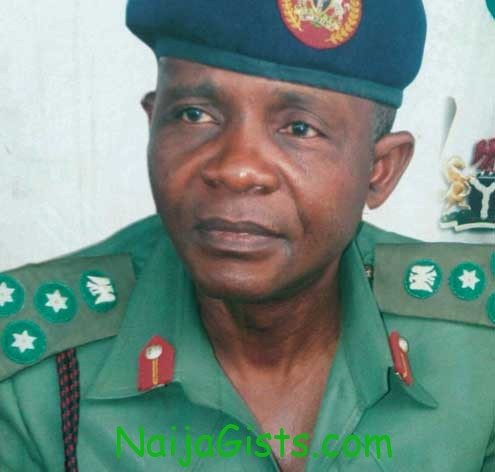 He was attacked by armed robbers suspected to be Fulani herdsmen at the long bridge near Berger bus stop on Lagos-Ibadan expressway last weekend.

The late General Iruh was said to be coming from Ilorin, Kwara State where he attended the burial of his church member when his vehicle had a flat tyre on the long bridge.

As he tried to fix the tyre, armed robbers suspected to be Fulani herdsmen armed with daggers, bows and arrows emerged from under the bridge and attacked him. He died before medical assistance could be offered at the emergency/accident facility near 7Up where he was rushed to.

The four suspects who are currently helping the police in their investigation are: Alamin Grema, Mustapha Musa, Yahya Amodu and Cube Morris. They are being detained at the Ogun State Police Headquarters, Eleweran, Abeokuta.

“Four persons arrested in connection with the robbery and murder are helping us in our investigation. They are being detained at Eleweran, Abeokuta. The investigation into the incident is ongoing.

“Like the state Commissioner of Police, Compol Okoye said, no stone will be left unturned in the course of police investigation into the incident,” Adejobi said, adding that police have mounted surveilance on the area regarded as a black spot.

The Ogun police image maker explained patrol teams in three vehicles have been deployed around the long bridge. While one is stationed close to it he said two others patrol the area at intervals daily.

Adejobi solicited for the cooperation of the people by offering useful information on the robbers’ hideout adding, “the robbers are no ghosts. They are human beings who live among the people. The commissioner has promised we shall shield the identity of informants, so people are free to come forward with useful information.”

Reacting to the killing of the general, online readers called on the governors of Lagos and Ogun State to beef up security at the black spot to save people from the incessant attacks by robbers suspected to be Fulani herdsmen.Some readers suggested that armed policemen should raid the area to rid it of criminals while security surveillance should be intensified around the bridge from 7 p.m daily.

“Must we wait for a prominent personality to become a victim before government will take serious action?” a reader queried.

The sectional secretary of the notorious Kara Cattle Market, Alhaji Abeeb said he or the other traders at the market were not aware of the killing of General Iruh. He added that the four suspects arrested are not traders at the cattle market