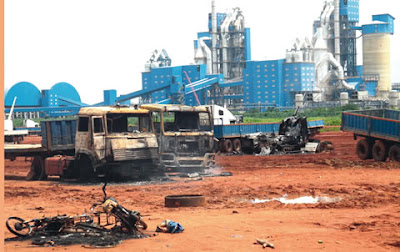 According to a report NaijaGists.com obtained from Punch Newspaper, a very bloody clash involving some Hausa and Yoruba people in the Ibese, Yewa North LGA of Ogun State on Wednesday claimed 3 lives and left over 30 vehicles vandalized.

According to news correspondent from the scene, the crisis among the two ethnic groups began on Wednesday night after a disagreement between two individuals over a prostitute.

The violence later escalated into a violent inter-tribal crisis leaving properties and businesses vandalized and looted by the Hausas.

The residents of the busy town were said to have fled the community.

Armed policemen were deployed in the troubled town to forestall further break down of law and order while an Armoured Personnel Carrier was seen stationed in front of the Dangote Cement Factory located within the community.

The Chairman of the task force in the affected market, Sikirulah Akinsola, confirmed to newsmen that the violence erupted due to a disagreement between two persons over a commercial sex worker.

Akinsola, who also doubles as the Bada Orile of Ijako Village, a suburb of the town, said more than 200 persons of Yoruba extraction who felt aggrieved by the alleged killing of their kinsman had decided to demonstrate on the streets when the crisis erupted.

According to him, one Kehinde had also allegedly been killed last May by a suspected Hausa man in the town.

The Ogun State Police Public Relations Officer, Muyiwa Adejobi confirmed the incident, but said no one was killed.

Adejobi, an assistant superintendent of police however said the violence in the town had nothing to do with ethnicity.

He said, “It was caused by a prostitute and some of the drivers had a problem with some men who claimed to be Ibese indigenes. There was no ethnic colouration. There was no casualty and only 14 vehicles were burnt.”

Do we have to fight to prove a point? Why can’t we live together in harmony!