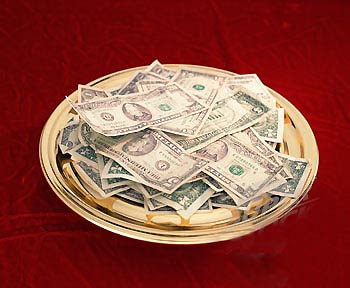 A Nigerian army officer and the former aide to late General Azazi who used the deceased name to extort 150 Million Naira from Bayelsa State has confessed that he paid a total of 11 million naira as tithe to a pentecostal church.

The Army officer was alleged to have used the name of the late National Security Adviser, General Andrew Owoye Azazi to swing the deal during the administration of former governor of Bayelsa, Timipre Sylva.

Speaking while delivering judgement on a four count charge preferred against Colonel Robert  Ahangba (N/9827), President of the court martial, Brig.Gen. Edward Nze said that the officer donated N11 million to the church in two installments of N9 million and N2 million.

WARNING TO LOOTERS WHO PAY TITHES FROM FRAUD MONEY

The worst of it all was that this Army Colonel stole a huge amount of funds he didn’t even need in his life. This man should have been handed life imprisonment. Even in the bible we learnt it is a very big offence for a man to prepare a meal he can’t consume.

He simply paid a tithe to his preferred denomination from a loot to atone his sins. The church he paid to didn’t ask him to donate money he made through fraudulent means to God. I must defend the church on this.

You looters should stop destroying church’s image because public funds was made available to you people. Mrs Ibru committed her own version last time on Redeem church. An accountant working under the auspices of Sheraton Hotels Ikeja committed similar offence while donating his millions to Christ Embassy that went through legal tussle but the Church triumph on this case.

I honestly pity this very man during his travails because same person was still squatting with his family with a room and parlour at his Ikeja resident.

A Colonel just gave out #8 million naira to a lady that exchanged pleasantry to him in the banking hall. The Army man wants to turn himself to Father Christmas overnight to impress members of the public that he has arrived financially whereas these amount of capital can raise a small scale industry perfectly in any parts of the country to create jobs.

Is it GEJ that made him to share his largesse without thinking ?

Thank God his ecstasy was caught short in the society otherwise it is people like this that are destroying our little girls in the rural communities.

Who knows how many of them (girls) he had messed up before his Owambe was caught short?

Igbo Man Supports Deportation Of Igbo People From Lagos By Fashola
Governor Fashola Deported Destitutes From All Over Nigeria; Igbos, Develop Ur Land & Be Ur Brother’s Keepers