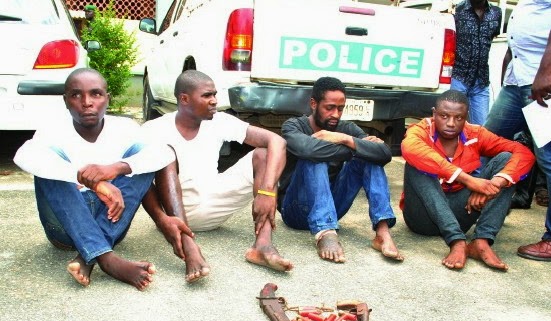 Obadan was shot dead on February 1, 2014 at Ikorodu area of Lagos and his car was later abandoned at Lucky Fibre area.

The police had declared a manhunt for the killer robbers until last week Friday, when SARS operatives, led by Abba Kyari, acting on a tip-off burst the criminals’ hideout at the Ajelogo-Akanimodo area of Mile 12 and arrested two members of the gang.

Two locally made single-barrel short-guns with 12 rounds of live cartridges were recovered from them. The confessions of the two suspects led to the arrest of two others.

One of the four suspects paraded yesterday by the state Commissioner of Police, Mr. Kayode Aderanti, at Ikeja, Samuel explained that the leader of the gang, Oke fired the shot that killed the editor.

His words: “My name is Samuel (aka junior boy). I was invited to join the gang by my friend, Babatunde (surname withheld by us). Oke is our gang leader. SARS operatives killed Oke and the second in command, Benji, recently during operation at Mile 12. Two other members are still on the run.

“On the fateful day, that was early this year, we were roving the streets of Ikorodu in two cars, a Toyota Sienna and Camry when we sighted a Toyota Yaris with number plate AKD 7O1 CE. Our Oga, Oke, ordered his driver to double-cross the driver of the Toyota Yaris. We double-crossed him and Oke ordered the driver of the Yaris out of the car but he was stubborn. Oke collected his Laptop but the man was dragging it with Oke. The man held Oke on his cloth and Oke got angry and shot him at close range and he fell down in his car. Oke is ruthless, he has penchant for shooting. I don’t know why he did not fire a second shot because he liked killing.

“I feel so sorry for the man but he was too stubborn. When we left the scene, I asked Oke why he shot that man who was not armed but Oke said if the man had respected him and did not argue with a man with a gun, he would have lived. It was the following day that we read in the newspapers that the man Oke shot was an editor.

“I felt so sorry and I confronted Oke, telling him that he had murdered sleep for killing a journalist, and he threatened to shoot me too as he shot Makinde in the hand for challenging him. “

“My advice to people is that they should not argue with armed robbers during attacks as you may not discern their temperament during operations. Some of us are good while some of us like Oke, are wicked. Don’t just argue with a man with a gun.”

Oke’s driver, Makinde, who corroborated Samuel’s story, said: “I was Oke’s driver. I was ordered by our leader, Oke to block that man. I would not have got him if not for the bad spot on the road. The man was speeding too much but a pothole slowed him down and I double crossed him.I saw him struggling with Oke.He held Oke on his shirt but I don’t know whether it was Oke or Adeshina that shot him because, the two of them were together and they were all armed. I did not ask questions but I overheard the two of them arguing on who shot the man. It was either Oke or Adeshina that killed the man. Since our gang killed that man, our lives have not been the same.”

Aderanti, who also paraded the vicious dog that attacked a four-year-old boy recently at the Igando area of the metropolis, said four members of the gang that killed Toyin Obadan had confessed that their gang member killed the editor.

“They also confessed that two gang members, including their leader, were killed by SARS operatives during a shoot out. They mentioned two others, Olasheu and Omo Alhaja as remaining gang members who are alive and on the run. We have declared manhunt for the two suspects,” he said.