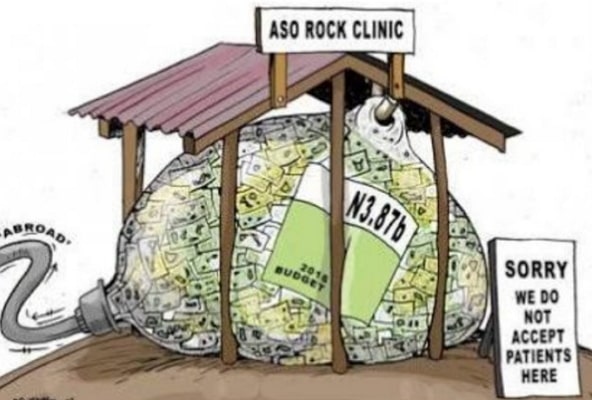 Against the backdrop of the claim by President Muhammadu Buhari’s wife, Aisha, that the Aso Rock Clinic, Abuja, lacked medicaments and syringe barely 18 months ago, Nigerians must have been taken aback by the report that the clinic had been allocated N9.7bn in four years.

So, what is the hospital doing with the resources? Aso Rock Clinic takes care of the medical needs of the president, vice president; their families as well as employees of the Presidency. Indeed, what has been allocated to the hospital may hit the N10bn mark if the N823.44m that the government proposed for the hospital in this year’s budget is approved by the National Assembly. Figures released by New Telegraph show that the facility got N3.94 billion in 2015, N3.87bn in 2016, N331.70m in 2017 andN1.03bn in 2018, making a total of N9.17bn.

The shocker is that, in spite of this apparently huge expenses, President Buhari’s wife has had cause to complain about the services in the hospital in October 2017. At the opening of a stakeholders’ meeting on Reproductive, Maternal, Newborn, Child, Adolescent Health and Nutrition (RMNCAH+N) organised by her pet project, Future Assured, Mrs Buhari berated the management of the clinic over alleged poor services and lack of medicaments. She recalled that she was once advised to seek medical help abroad when she fell ill because of the poor state of the hospital and asked the hospital’s management to account for the huge budgetary allocations to it.

Although budgetary allocation to the facility for 2017 was not much, allocations of the previous two years were quite humongous. So, Mrs Buhari’s inquisitiveness to know how the facility spent the money would appear justified. “If the budget is N100 million, we need to know how the budget is spent,” she said. Her anger is also justified in a country like ours where auditing of public entities rarely takes place and when it is done at all, it is like an annual ritual; nothing comes out of it.

It is indeed puzzling that public officials, including President Buhari, still have to jet out of the country for medical attention in spite of the huge investments in the Aso Rock Clinic. This should not be so. Hospitals of that status in other climes serve the purpose for which they were established. It is only in very exceptional cases that top functionaries travel out for medical care. As a matter of fact, in many other countries, such travels are seen as demeaning to national pride.

We join Mrs. Buhari in calling for a thorough audit of the hospital’s allocations. ‘To whom much is given’ as they say, ‘much is expected’. It is important to know if really the problem with the facility is the fact that virtually all its services are free, from consultation, to treatment, laboratory tests, etc. as claimed by the Permanent Secretary, State House, Mr. Jalal Arabi, in his reaction to Mrs Buhari’s criticism. He had hinted then of plans to commercialise the medical centre, in order to boost its revenue and ensure better health delivery system. How much toll is the free services taking from government’s subvention?

There is no point running a single hospital with huge taxpayers’ money without having commensurate result. Moreover, given the number of people it is to cater to their needs, there is no justification for the hospital to have more funds for capital projects than all the 16 Federal Government-owned teaching hospitals put together. For example, in 2016 alone, the clinic got N3.87bn, whereas the teaching hospitals got N3.33bn, about N500m less than that of the medical centre.

The country cannot be losing money on all fronts. If it must spend so much on the Aso Rock Clinic, then there cannot be further justification for the president and other public officials expending the country’s hard earned foreign exchange on medical tourism.

[Exclusive report by The Nation]

Trump Vs Buhari And Their Supporters
Nigeria, A Country Of Many Possibilities Where Anything Can Happen