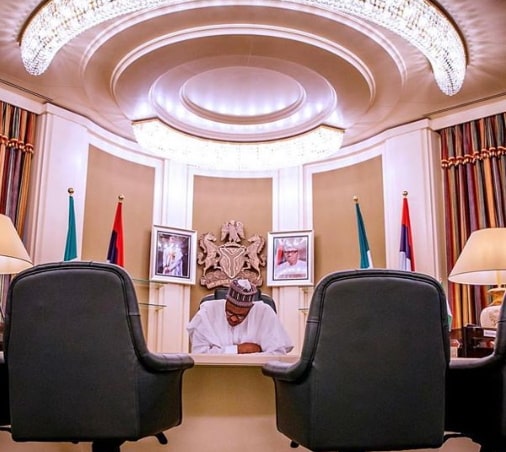 Before Aso Rock turns jail-house to Muhammadu Buhari; before the presidential villa becomes tomb to his presidential corpse, will he neuter the myth of his impending nemesis? Or will he nurture it? Will he deprive his ego the lyricism of the mystic cabal?.

What cabal? The one crawling out of the woodwork, as you read. The one scurrying in ravenous packs, like spectres and gnomes of primeval murk, to parade as patriots. In a few months, Buhari will be seen as a national boon or disaster, depending on how he responds to their lure.

The quality of his response would determine if he would be hailed as a true change agent by 2023, or inexhaustibly maligned as the fig that let down the leaf, the affliction Nigeria ought to have expunged.

En route the polls, contemporary boondocks legend mooted parables of him as a warrior in wolf-skin vest, brandishing a shield of steeled morality and a stone-axe, forged to hack down monuments, that, the corrupt ruling class built to entrench corruption.

His second coming, like his first, was undoubtedly borne of reaction. But he never mulled how people see him: be it as the ‘cloned Jubril of Sudan,’ an ‘unrepentant nepotist,’ ‘religious fundamentalist’ or devoted ‘Change’ agent;’ Buhari adopts the eloquence of silence.

Other beings passed through him as if he were a wraith. He mutated like Fagunwa’s ghommid, who transforms into a tree, an antelope, a raging inferno, a bird, water and a menacing snake. While Fagunwa’s mythical creature assumes more or less the characteristics typical of its new category of being, Buhari struggled to preserve his individuality, mostly the capacity to think and act humanely, against the assault and intimidation of Nigeria’s tyrant herd.

At his re-election, the New York Times, opined that it “was in many ways a referendum on honesty, as voters once again embraced a candidate who held up a broom at rallies, declaring to sweep away the graft that has given the nation a bad reputation worldwide.

“It was also a tribute to the power of incumbency. For all Mr. Buhari’s talk of fighting corruption, some prominent suspects – including a governor caught on camera handing out a bribe – have gone unprosecuted under his regime. Critics say he targeted political opponents in his anti-graft inquiries.”

The foreign newspaper, so doing, launched a subtle attack at Buhari. Was it right by its critique or not? Does it intone a honest appraisal of Buhari’s first term or does it follow coordinated attempts by so-called super powers and their agents to thwart Buhari’s re-election, citing his suspension of former Chief Justice of Nigeria (CJN), Walter Onnoghen, and his alleged attempt to muzzle the opposition en route the elections.

It was public knowledge, that, these self-acclaimed champions of the ‘First World,’ severely starved of slush money hitherto channelled into their economies via money laundering and other shady international transactions by corrupt public officers, made frantic efforts to influence the February 23 elections in favour of Peoples Democratic Party (PDP)’s Atiku Abubakar.

All the retired generals, bank chiefs were solidly against Buhari’s re-election, since he caused them serious ‘bad business.’ His implementation of the Treasury Single Account (TSA) policy, for instance, severely hampered their access to unearned benefits among other proceeds of their corrupt enrichment hitherto channelled into their banks’ coffers by dishonest public officers and government ministries in connivance with private collaborators.

One of the most curious kinks of the February 23 presidential elections, was the patronage of these predators by large segments of the voter divide, blinded by hatred of Buhari. As it was in 2015, this motley gang, comprising civil servants/treasury looters, pipeline vandals/oil magnates, thieving bank chiefs, chronic billionaire debtors, prophets of Mammon, ethnic/religious bigots, serving and retired military men, conspired to halt the Buhari shuttle.

They composed a soulful melody of hate, tainting Buhari as the most hideous villain bestriding the political space but thankfully, their melody fell flat on notes and lyricism as Nigeria refused to waltz to their spirited jazz of hatred and inordinate lusts.

Buhari’s re-election puts an end to the era, in which such desperate, lazy characters trooped to the presidential villa for hand-outs and unjustifiable favours.

Another beauty of his re-election is that none among them can misappropriate the glory of his electoral victory.

Buhari owes his second coming to the market woman of the sidewalk, the plumber, the bus conductor, the farmer, unemployed youth, student among others. He owes his re-election to everybody, including the career wailers and hailers and his most virulent critics.

Thus he must understand, that, he is not exclusively, the president of the north and parts of the south-west, south-east and south-south, where he won block votes. He is President of the Federal Republic of Nigeria, warts, haters and all.

This time around, Buhari should feel free and very obliged to be decisive. He could start by scorning the renewal of licenses of shady individuals holding oil blocs in the country. How progressive it would be, if oil rich states rather than retired military generals, are exclusively allowed ownership and control of oil blocs.

Buhari should henceforth avoid a situation, wherever it exists, that the presidency is forced to pay the salaries of staff of private businesses of former heads of state; such malady is perpetrated by sneaking names of the latter’s staff into government payrolls as ghost workers.

Imagine a situation, whereby, a retired public officer, has about 400 of his staff on the payroll of the presidency or a federal ministry.

The multiple failures that beset the country, from the corrupt judiciary, executive and legislature, insecurity, substandard education, lack of quality healthcare, looting of public treasury, to the bloody insurgency in the northeast, are attributable to the dominance of a predatory ruling class.

At Buhari’s re-election, Nigerians expect that he would uncompromisingly lay to waste, the corrupt institutions built by his predecessors.

To achieve this objective, his mantra of chastity and change must neither be diametrically opposed to the realities of his ethics nor should it suffer the affliction of mutating expediences. The new president-elect must never dilute his moralist communion with toxic liquor. Lest he evolves as a revolutionary of the comedies.

He won’t eliminate besmirched society by redeeming morals with the amoral thus let him distance himself from toxic company.

Let him settle down to real work. In his recent address, he said there are tough times ahead. True. That warning is as much a jolt to him as it should be to its intended recipients.

The time for cuddling Buhari is now over. Let him truly aspire to fulfill his promises of ‘Change’ that every body can believe in and prosper by.

On this page, I campaigned for Muhammadu Buhari. On this page, I say, let him not conduct himself like the proverbial shepherd, who having lived among pigs, renovates his home after the sty with cinematic splendour.