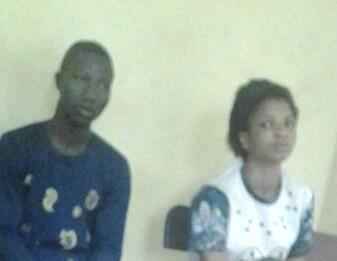 Chioma Okekere, the teenage daughter of Reverend Uche Okereke, the Pastor in charge of Assemblies of God Church in Iyana Ipaja Lagos has been found five years after she fled home to stay with her boyfriend, Moruf Sadiq.

Chioma was 12 year old when she met 14 year old Moruf, a fashion designer.

After 5 years, Rev. Okereke was last week informed of Chioma’s new hideout and how she had converted to Islam.

She was immediately rescued as police nabbed Moruf who was accused of abducting Chioma against her wish.

Moruf was dragged to a Magistrate’s court in Ejigbo Lagos today where his plea was rejected.

Moruf was placed in handcuffs and taken back Igando Police station where he will be taken over to the family court as directed by Justice Akeem Fashola.

Here is what Rev. Okereke said in court today;

Chioma who is currently pregnant for her boyfriend denied all allegations her father brought against Moruf.

She told her father to his face that she was bound to the relationship and nobody can separate them.