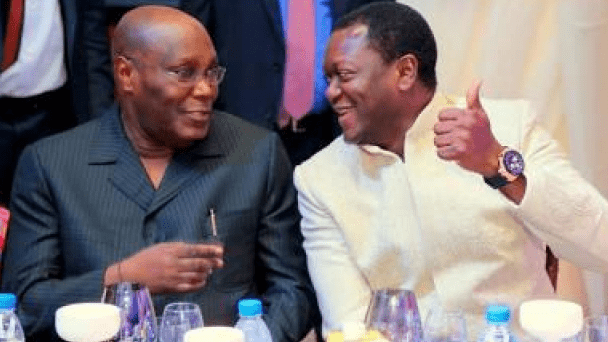 The EFCC accuses the lawyer of handling $2million without going through a financial institution, an amount that exceeds the amount authorised by law to be transacted in cash.

A three-count charge, signed by prosecuting counsel Rotimi Oyedepo, was filed at the Federal High Court in Lagos on Friday against the lawyer and his brother Erhunse Giwa-Osagie.

EFCC says they allegedly contravened sections 18(a) and 1(a) of the Money Laundering (Prohibition) Act 2011, punishable under Section 16(2)(b).

The duo were arrested in Lagos on Thursday, after they heeded an EFCC invitation.

The lawyer was first arrested in March after a bureau de change operator Alhaji Abdullahi Usman identified him as the owner of the $2 million found in his possession. The commission alleged the money was to be used for the 2019 elections.

But Abubakar condemned the investigation and said the anti-graft commission was intimidating him and his supporters.

“My son in law and lawyer have been detained, one for three weeks and the other recently,” Atiku said in March.

“They are paying the price for supporting me. I urge those now persecuting them to remember that a government’s mandate is to pursue peace and justice for all, and not just those who support them.”

EFCC denied the witch-hunt claim. It said the money with Abubakar’s lawyer exceeded the amount authorised by law to be transacted in cash.

The commission said Giwa-Osagie’s action is contrary to Section 18(c) of the Money Laundering (Prohibition) Act, 2011 as amended and punishable under Section 16(2)(b) of the same Act.”

The anti-graft body said the duo allegedly contravened sections 18(a) and 1(a) of the Money Laundering (Prohibition) Act 2011, punishable under Section 16(2)(b).