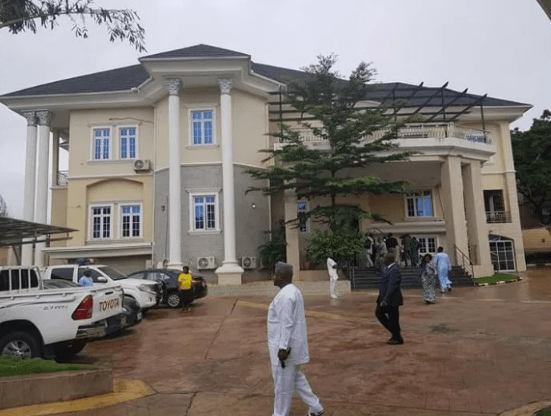 The EFCC has handed over a 13-bedroom, one-storey building and a basement, forfeited by the late Chief of Defence Staff, (CDS) Air Chief Marshal Alex Badeh, to the management of North East Development Commission (NEDC).

The property was forfeited on the order of the court, following diligent prosecution of the late Badeh for money laundering and corruption by the EFCC.

Located at No 6, Ogun River Street, Maitama, Abuja, the property was handed over to NEDC management by the EFCC Director of Operations, Muhammed Abbah Umar, who represented the Acting Chairman of the Commission, Ibrahim Magu.

Magu, in his remarks, congratulated NEDC’s staff and management on taking over the “beautiful structure” and urged them to maximize the usage for the benefit of the NEDC’s management and the country.

“I wish to congratulate the management and staff of the NEDC on taking the ownership of this beautiful edifice. I equally want to implore the Commission to put the property into maximum use for the benefit of the staff of the Commission and the country at large,” Magu stated.

The EFCC boss stated that the EFCC was unwaveringly committed to continue to living up to its constitutional mandate of riding the country of corruption, by applying diligence in its investigation and prosecution.

He added that the Commission will not rest on its oars in tracing and recovering of looted funds and properties procured with proceeds of crime.

Responding to the gesture, the Chairman of the Commission, Major-Gen. Paul Tarfa, (Retd), appreciated the gesture and promised to cooperate with the EFCC and the federal government in the fight against corruption.

He expressed gratitude to President Muhammadu Buhari’s administration for considering NEDC the most appropriate agency of government to be allocated the edifice.

“We are grateful to the federal government and EFCC for allowing us to use this place permanently as office or liaison office, here in Abuja. We appreciate this gesture, because we understand that ministries and other departments and agencies have been trying to get this place but because of the importance government attaches to NEDC, we are glad that we have been considered for this.

“So, we thank you because without the cooperation of the EFCC, and the support of the government, other ministries would have gotten it. Please, convey our gratitude to the Chairman of the EFCC,” Tarfa said.