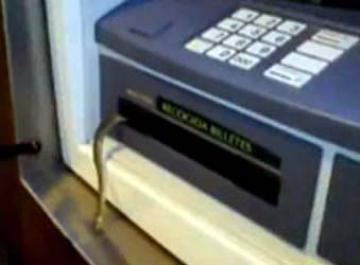 To his surprise, a Spanish man who went to withdraw cash from an ATM Machine, got snake instead.

This episode transpired at a branch of the Caja Madrid bank in Llodio, Alava, at 8am on his way to work.

The middle-aged man managed to grab hold of his money despite the snake attempting to attack him, reports Euro Weekly News.

He then alerted the police, who arrived on the scene, and with the help of the bank manager, discovered that the snake was trapped by the mechanism of the cash point.

The manager activated it from the inside, freeing the snake, which was put in a box and taken to a shelter.

Police say they have not ruled out the possibility that someone may have put it there for a prank.

However, they say that it is a rural area so it’s possible the snake got there of its own accord. Watch the video below

Snake Comes Out of ATM Machine