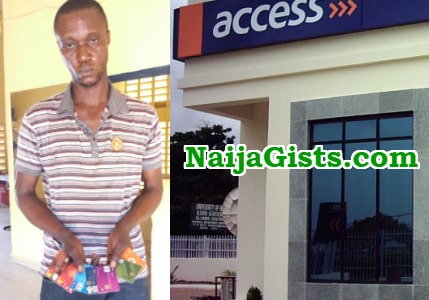 A man identified as Obinna Okafor is currently cooling off in police detention after robbing ATM users at a new generation bank in Anambra state.

The 30-year-old suspect was arrested by policemen on patrol at a branch of Access bank in Nnewi.

The native of Enugu Ezike in Enugu state was caught while withdrawing money using an ATM card stolen from a medical student in Nnewi.

At the time of his arrest, he was caught with 6 different ATM cards and N120,000 withdrawn from his last victim.

Police spokesman for Anambra state, Haruna Mohammed said the suspect would be charged to court after investigation.

Son Who Killed Father Over Rabbit Meat In Akwa Ibom Sentenced To Death By Hanging
Jigan Babaoja: How I Saved Violent Driver From Being Killed By Soldiers