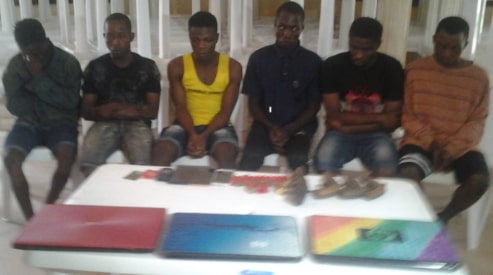 The Lagos state Police command have smashed a bank robbery syndicate that had been terrorizing Alaba Market and its environs in Ojo Local government area of Lagos.

This was confirmed by the Lagos State Commissioner of Police, Mr. Imohimi Edgal, and the suspects were paraded with other suspected criminals at the Police Command, Lagos.

The police boss said that on 7th October, 2018, the police received credible information that some armed men were sighted making unauthorized withdrawals at about midnight at Stanbic Bank branch at Alaba using the ATM machine and cards suspected to have been stolen from members of the public.

He said that based on the information, the police operatives from Ojo Division and FSARS Ikeja were mobilized to the scene where they arrested two of the robbers while the other gang members escaped.

CP Edgal said that when they were searched, stolen Diamond Bank and UBA Bank ATM cards including Nokia mobile phones were recovered from the suspects.

During interrogation, they confessed that they belonged to an armed robbery gang known as Blue Water Boys and they had been terrorising the area for some time. They mentioned Ojo, Agric, Okokomaiko, Ajangbadi, Ijaniki, Iba and its environs as areas they operated in and controlled before their arrest.

The suspects further confessed that they robbed the owner of a restaurant at Araromi Street in Iba area and in the process dispossessed the victim of her phone and ATM cards.

Edgal said that the confession of Ayoola led to the arrest of the other gang members in various areas.

The CP said that the suspects were detained at the Command and will be charged to court.

How Beautiful Model Was Murdered In Akure For Breaking Up With Boyfriend
Sunday Afobale, Killer Togolese Cook Who Killed Nigerian Boss In Ikoyi Lagos Arrested In Ondo State [PHOTOS]