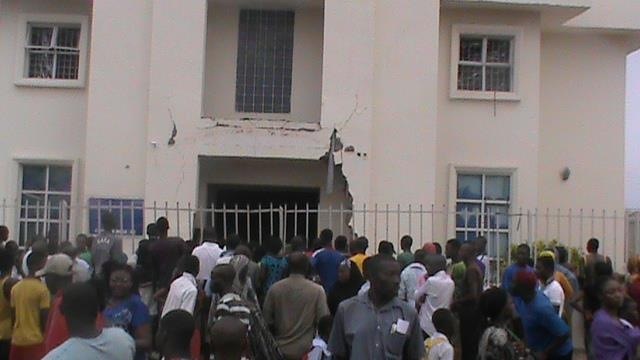 At least 10 people including three soldiers were shot dead in Auchi on Monday evening in a coordinated robbery attack on four banks which threw the polytechnic town into pandemonium with residents taking the incident as an invasion on the community.

The attackers had reportedly struck at about 6 p.m. in the melee that lasted for about three hours, by first attacking the Auchi Area Command and the Auchi Divisional Headquarters of the Nigerian Police, both along Jattu Road where buildings were destroyed and a patrol van packed opposite the area command was bombed.

The gunmen were also said to have launched attack on the private homes of soldiers along Warrake Road in the town, damaging the Amoured Personnel Carrier positioned in the area in an apparent move to demobilize the security agents from giving them resistance.

Thereafter, the gunmen, who were said to have arrived the town in three Toyota Camry cars and a bus, reportedly launched simultaneous attacks on four banks, namely First Bank, situated along Otaru Road and three new generation banks, Ecobank, AccessBank and GTBank, along Polytechnic Road with dynamites and bombs which they used to gain entrance into the premises and vaults of the banks. Most of the dead victims who were identified as Okada riders were found along Igarra and Jattu roads.

Among the victims were 16 year-old Khadijat Musa, a yam seller from Kogi State and an unidentified young man who were rushed to the Auchi Central Hospital, where the young man reportedly died. Speaking to journalists, the Chief Medical Director of the hospital, Dr Jude Omoregie explained that two pellets were deposited in Khadijat’s body.

He also confirmed that three soldiers were brought in dead to the hospital. Narrating her ordeal, Khadijat said she was on a commercial motorcycle near First Bank when they saw one of the attackers, adding, “I greeted him good evening and he shot at us. The bike-man died and I was rushed here.”

Following the incident, soldiers yesterday morning blocked all entry and exit routes which resulted in heavy traffic jam along the Benin-Okenne-Abuja Road, as travelers at border of Okpella near Okenne coming from Abuja and others near Avielle coming from Benin City were stranded for hours.

Speaking at the palace of the Otaru of Auhci, Alhaji Haliru Momoh, Odubu called on the Inspector General of Police to reinforce the police personnel and equipment in the area. “We have seen things for ourselves, we have seen the damage done to the police divisional police headquarter and the Area Commanders office and four banks.

It is clear that these people came with one intenton, to wreck maximum havoc; they were dare devil armed robbers who were very blood thirsty, sadistic in approach. We want to assure you sir that this government of Edo state will spare no efforts in ensuring that these people are traced, arrested and charged to court. On our part we will do everything humanly possible to assist the security agencies to do a good job at that.

“I want to charge on behalf of the government of Edo state the Inspector General of Police to deploy enough men and more modern materials to ensure that everything is done to trace these people down, we want to assure you that Edo state can never and will never be safe haven for criminals. We will ensure that these people are gotten and that they are prosecuted.

Our people of Auchi should not be despaired because by the special grace of God it is a passing phase as the security agencies; the SSS, Police and Army have assured us that they will track these people down.” Also speaking, Edo State Acting Commissioner of Police, Mohammed Hurdi, told journalists that he did not suspect terrorist attack, saying that the number of dead have been accounted.

“I have visited all the places and the extent of the damage is what matters but for the destructive part of it that is where the police station, the Area Command and other banks were affected. “These places where destroyed by the dynamite they threw but in terms of loss, it was only one bank they were able to gain access to that is where we have some loss of amount which is yet to be ascertained.

There were lives that were lost, we are yet to determine the number of persons that died at the moment. “As far as we are concerned for now it is robbery and nothing more than that because they were after money not even after money, not even after arms, even when they attacked the polce station and the Area Command, nothing happened to the armoury it was intact, so they wanted to demobilise the police so that they can have access to the vault of the bank so that they can have access to money.”

At the time of filing this report, normalcy was gradually returning to the town, but many residents who are still scared were said to have locked themselves in their houses, just as many commercial businesses, including banks did not open for business yesterday(SunNews)