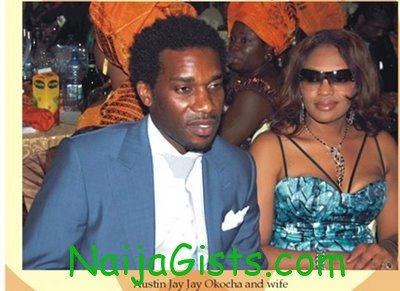 Former Super Eagles captain, Austin J.J. Okocha’s marriage is presently in trouble as the cople often get physical with each other. naijagists.com

“All is not well in the home front of Nigeria’s former national team football captain, Austin Jay Jay Okocha, yemojanews.com can authoritatively reveal.

An insider told us in confidence that the gifted master dribbler is not enjoying his marriage of over ten years at the moment, all because of allegations of infidelity flying between him and his beautiful wife, Nkechi.

We learnt that while Okocha was plying his trade overseas, Nkechi who kept the home front in Nigeria was hobnobbing with different kinds of men. She allegedly partied a lot, goes clubbing and used to gulp different types of drinks.

Because of her smashing beauty, many Lagos big boys began to court her, knowing that money was never her problem, because her hubby, Okocha was one of the highest paid Nigerian footballers abroad.

To have Nkechi turned to a competition among the big boys in Lagos, even if it was to massage their ego, that they are dating Okocha’s wife.

With her husband staying thousands of miles away and pressure mounting from all corners, yemojanews.com gathered that Nkechi who has two children for her hubby succumbed to date some of these guys. One of the guys Nkechi allegedly fell for was the disgraced former Managing Director of Bank PHB, Mr Francis Atuche, (now Keystone Bank) who is facing corruption charges in the court.

After Atuche, news began to fly that Nkechi was hanging out with multi-millionaire owner of ThisDay Newspapers, Mr Nduka Obaigbena. Not long after, people began to see Nkechi with African Queen crooner, Tuface Idibia.

With all the rumours of her many men flying in Lagos high society, Nkechi tried all she could to stop the news from spreading all over the country and particularly killed it in the media.

Meanwhile, we learnt that Okocha has also been dribbling and scoring free kicks in between the thighs of many society girls in Lagos after his retirement.

Recently, Okocha had a shouting match with Nkechi which caused a lot of trouble. Yemojanews.com was told that the former BBC African footballer of the year had planned to fly to Abuja with one of his girlfriends to have a good time together.

On the appointed date, Okocha told the lady to go and wait for him at the Murtala Muhammed Airport, Terminal 2 (MM2) in Ikeja, Lagos. The lady got to the airport early and waited for several hours without any sign of her lover boy’s arrival.

When she got tired of waiting, the lady reportedly began to call Okocha’s mobile phone. yemojanews gathered that while the lady was busy calling, Okocha was still in his house taking his bath. And as the call persisted, the source said Okocha’s wife, Nkechi picked it.

Not knowing that it was Mrs Okocha that picked the call, the lady just started blabbing, complaining that she had stayed too long at the airport waiting, and would not go again if he doesn’t show up on time. Nkechi reportedly listened so well, and after she heard enough, she shouted at the lady at the other end and began to rain curses on her. Okocha’s lover quickly cut off the line and switched the phone off.

We were told that Nkechi immediately stormed the bathroom and began to shout at Okocha, who also shouted back at her. When Nkechi refused to stop and even resorted to abuses, yemojanews.com learnt that Okocha pounced on her and gave her some beatings.

We learn that the issue is still burning in their home while friends and family members have waded into it, trying to settle the matter.” (yemoja)

The enemy must have done this