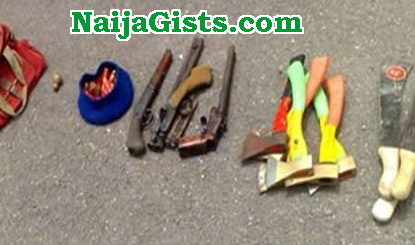 3 people were killed during a clash between members of Aye and Baga fraternities at Umusiome Nkpor in Idemili North Local Government Area of Anambra State. More than 10 others sustained various degrees of injury.

It was learnt that the assailants, who were on two motorcycles, invaded the town about 9p.m. on Tuesday. They went straight to a popular drinking joint where they opened fire on customers. At least, 10 persons died on the spot. Witnesses said many other persons who sustained various degrees of injury were rushed to an undisclosed hospital for medical attention.

The Sole Administrator of the local government, Mrs. Vera Akua, condemned the attack, which he described as most unfortunate and barbaric. Akua, who spoke through her Special Assistant on Media, Godwin Iwanan, expressed concern that the attack was coming barely a month after a traditional ruler in the area was gruesomely murdered by yet to be unidentified persons.

She regretted that the acts of cruelty were being perpetrated at a time government was making concerted efforts towards ridding the state of criminal elements as exemplified by the stick approach of the Governor Samuel Ortom’s amnesty programme. The sole administrator condoled with the families of those who lost their lives as well as the injured.

She appealed to the people to remain calm and assured them that government would do everything possible to ensure the safety of lives and property in the area. In the cult clash in Umusiome Nkpor, trouble started when Aye stormed the stronghold of Baga on Tuesday and reportedly killed one of its members. Dissatisfied with the loss of their member to the rampaging Aye group, armed members of Baga yesterday went on a revenge mission at Umusiome.

They killed two of Aye members and left over five injured. As at the time of filing this report, residents have deserted the area for fear of being arrested by security operatives.