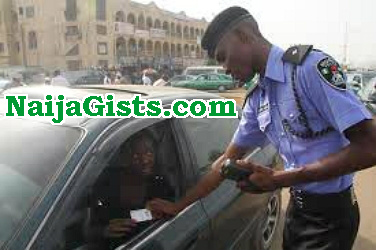 An Assistant Inspector-General (AIG) of Police in Charge of Zone 11 comprising Oyo, Osun and Ondo states, Mr Dan Bature says any policeman checking vehicle particulars on the highways is on illegal duty.

Bature said this on Wednesday in Ibadan during a two-day familiarization visit to Oyo State.
He said that the duty of the police was not to check vehicle particulars but to ensure safer roads.
Bature warned policemen against blocking highways, saying police patrol vehicles were not supposed to be toll gates.

He said the Inspector-General of Police (IGP) was committed to changing the negative image of the police and supporting the anticorruption war of the Federal Government.

Bature advised officers unable to key into the laudable initiatives of the IGP to resign from the force.
He said that a lot was expected by the public from the police, adding that this informed the monitoring of officers.

“The Inspector General of Police is determined to improve on your welfare and pursue the increment of your salary.
“But this can only be achieved when the people have good perception about the police, “Bature said.
Earlier, Sam Adegbuyi, the Oyo State Commissioner of Police, said that the officers were dedicated and patriotic.

Adegbuyi said that in view of the population of Oyo State, the command needed to create three more Area Commands in addition to the existing four commands.

He commended the AIG, Oyo government and the Police Community Relation Committee for the successes recorded so far in the fight against crime.