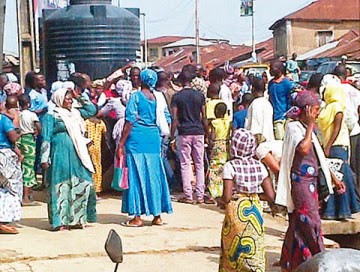 Several people who claimed they were defrauded besieged the premises of Ayonitemi Cooperative Business Finance, alleging that they had been defrauded by the firm.

The bank is located at Oniyangi, near the Emir Road, Ilorin, the Kwara State capital.

Many of the customers, who gathered on the premises of the bank as early as 7am, said they had lost substantial amount of money which they deposited in the finance house.

We observed that some of the customers were weeping.

They stated that they had been promised mouth watering financial offers if they made deposit in the bank.

Many of them spoke on the condition of anonymity to avoid being made subject of mockery by people who might know them.

One of them said she received information to come on Tuesday to collect her money which she had been depositing in the bank for many months.

She claimed to have invested about N1m in the bank without her husband’s knowledge and consent.

“I have been depositing money in the bank for some months. They promised that they will not disappoint us.

“They told us that they were from Kwara State and they had no other place to run to.

“So, I was convinced that this bank was real.

“I did not even inform my husband of my transactions with them.

“Unfortunately, they disappointed us and ran away.”

Some of them later descended on the office of the firm and carted away office furniture and items, including electronics.

[By Success Nwogu, Metro Plus]

Continue Reading
You may also like...
Related Topics:ayonitemi, bank, close down, ilorin, kwara