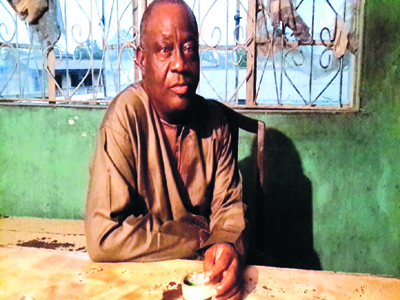 Three armed hoodlums stormed his palace on Sunday but failed on their attempt to kill him.

Their guns failed, but they descended on him and his chiefs with machetes and broken bottles.

Orelaja told The Nation in his palace yesterday that he was saved by the “prompt response” of passersby and residents.

He said: “I was in the palace, having fun with nine of my chiefs after we finished discussion on community matters. It was some minutes before 9pm. Suddenly, two unidentified men barged in and said they wanted to see Baale. The other one was sitting on a motorcycle. The chiefs asked them what the matter was, but they could not say anything meaningful.

“They were asked to leave, but the attackers brought out a gun and asked ‘who is the Baale among you’. One of them identified me and said ‘that is the Baale sitting down there’. Then, a resident, who saw the armed men, smashed the fluorescent bulb on the corridor of the palace and switched of other lights in a bid to confuse the attackers.

“The armed men moved towards me and said ‘you are the one disturbing us from picking our own Baale; you will die today.’ Then, they pointed the gun at me at a close range but the gun failed. This was when I started to struggle with them. They brought out a dagger and stabbed me on the arm and leg. They took to their heels when they overheard residents coming to rescue me. As they ran away, they were shooting to scare people. People came in and rushed me to hospital.”

The Baale alleged that the assassination attempt may not be unconnected with the chieftaincy tussle in the community. He fingered a traditional ruler as the brain behind the attack, saying the monarch had been threatening his life since he was elected Baale.