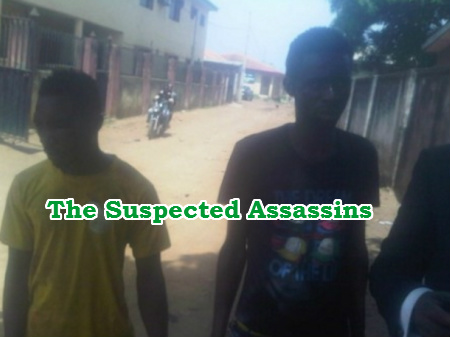 The manager of Baba Ijebu, Premier Lotto in Alimosho LGA of Lagos has escaped an assassination attempt.

His staff identified as Segun Oyesunmi allegedly paid an undisclosed amount of money to two assassins to snuff life out of him so he can take over the leadership of the business.

However, before the suspects could carry out the operation at Abule-Oki area of Iyana Ipaja in Lagos where Baba Ijebu resides they were rounded up on a tip off.

The suspects who reside at Agbara area failed after they contacted Wale to join in the operation and to help them to acquire equipment for the operation.

When they arrived Abubakar office at Abule-Oki in Iyana Ipaja for the operation, they were rounded up and handed over to the police at Gowon estate.

The two suspects, Gbenga Olunuga, 35 and Paul Alimele, 35 were charged with attempted robbery and murder before a Magistrate’s court in Ejigbo Lagos.

The mastermind of the assassination attempt is now on the run.