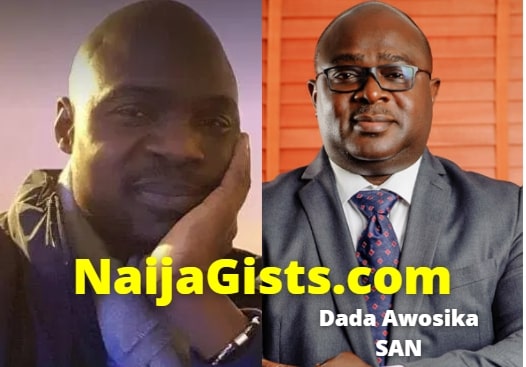 The leading counsel to Nollywood actor Olanrewaju Omiyinka aka Baba Ijesha , Mr Dada Awosika (SAN), says he is aware that he will be cursed on social media for defending the actor facing trial for defilement.

NAN reports that Awosika made the comment on Thursday during proceedings on the actor’s bail application before an Ikeja Special Offences Court.

He was responding to a plea to the court for witness protection by Mrs Olayinka Adeyemi, Lagos State Director of Public Prosecution.

She requested that the defendant should sign an undertaking promising that the threats would stop.

In his response, Awosika said:

“This defendant has been completely ruined on social media.”

“The witness, Princess Adekoya, has even posted videos and published supposed CCTV footage.”

“Is it the same social media that there are anonymous accounts, how do they know it is the defendant’s family sending the threats?”

“I have proof of the mother of the child posting videos on social media; does she have proof that the defendant’s people are the ones issuing threats.”

“The Iyabo Ojos of this world would be cursing over social media. I am sure that I will be cursed on social media for making an appearance for the defendant.”

Responding Justice Oluwatoyin Taiwo cautioned that the issue had become subjudice (under judicial consideration and therefore prohibited from public discussion).

“This court will not be swayed by things discussed on social media. I will only be swayed by the facts of the case and the law. Let us all calm down.

“Please refrain from discussing this case on social media,” the judge said.

The court has granted the defendant bail in the sum of two million naira with two sureties in like sum.(NAN)