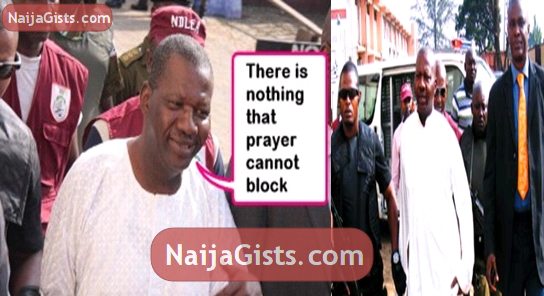 On October 13, 2011, Nigerian actor and movie producer Babatunde Omidina better known as Baba Suwe was taken into custody and detained by officers of National Drug Law Enforcement Agency under the assumption that he was in possession of hard drugs believed to be cocaine.

Baba Suwe was arrested at the Muritala Mohammed International Airport, on his way to Paris, France to attend a naming ceremony of an Air France staff scheduled for Saturday, October 15, 2011. He was supposed to be the master of ceremony at the event.

According to the agency’s head of public affairs, the actor had tested positive to drug ingestion and was immediately placed under observation. And so the days kept rolling by; attracting local and international media to the Baba Suwe-NDLEA case as the agency and whole world waited for the actor to excrete the alleged drugs he had ingested.

‘There is reasonable ground for suspicion and the actor is currently under observation. He is fine and has gone for the first excretion but no drug had been found on him. We have in the past recovered drugs after the fourth excretion. It is just the normal process for all passengers’, Hamza Umar, NDLEA Airport commander disclosed on day six of Baba Suwe’s dentention.

On October 21, a Federal High Court granted the NDLEA a further 15 days to detain Baba Suwe after presenting evidence that suggest the actor had swallowed ‘large amounts of drugs’ in his body.

On November 1, the actor made his first court appearance and thus begun the most profiled celebrity court cases of 2011. Justice Yetunde Idowu at the Ikeja High Court granted Baba Suwe on bail in sum of N500,000 (Five Hundred Thousand Naira). On November 4 last year, the actor became a free man again.

He might had regained freedom but had been stained with embarrassment. With the help of his counsel Bamidele Aturu, the actor dragged the NDLEA to court, suing for N100M damages for the unlawful detention which led to public humiliation. Justice Idowu on November 24 ordered the NDLEA to pay a sum of N25M (Twenty five million Naira).

It’s one year later but Baba Suwe is yet to receive a dime from the settlement. After a series of appeals and counter appeals, both parties are still in court.

Meanwhile the actor has taken advantage of the scenario and is reported to be shooting a movie over the whole ordeal.

One way or the other, Baba Suwe seems to be determined to cash out from the whole drug saga. (Source: TheNetNg Magazine)