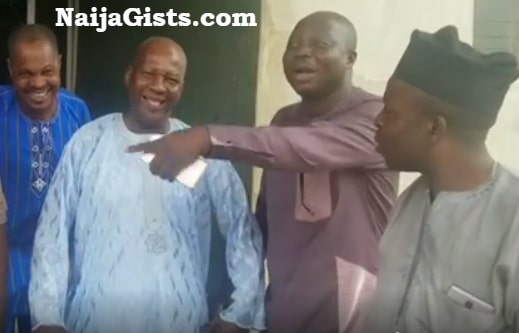 Why His Children Are Seeking Public Donations

Comic Nollywood actor Kazeem Abimbola aka Jigan Babaojawho was among the top actors who visited ailing actor Babatunde Omidina at home few days ago has responded to those cursing him out for sharing photo of himself handing over a wad of cash to the actor.

In a chat with Sunday Scoop, the actor stated that he took the picture to show transparency because the money was donated by members of the public.

Here is how he defended himself against those accusing him of living a fake life.

“When you are running a foundation, you must be as transparent as possible since it is not your money. I run the Jigan Baba Oja Foundation. I am only contributing my time and what I am doing is from my heart.”

“People will always talk about you, whether you do good or bad. But inside me, I know I am sincere and clean. The most important thing is for Baba Suwe to get help; I don’t owe anyone any explanation. There was no way we could have ignored him when we heard about his ordeal because he has contributed hugely to the movie industry.”

“Things have not improved for him. He needs to be taken to the United States for good treatment; he has partial stroke. Before now, the children didn’t want him to seek help from the public. But as things are at the moment, they have no other option but to seek help for their father to be adequately taken care of.”

See Baba Suwe As He Left His Ikorodu Home For Medical Checkup Few Days Ago.