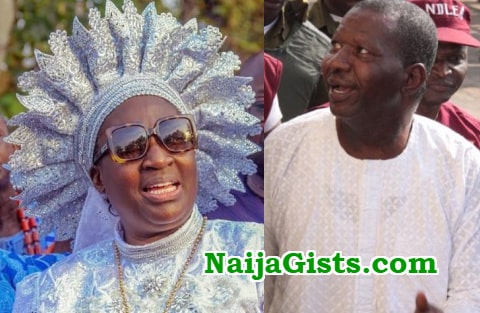 Yesterday Sunday, 24th Feb, 2019 Mayor Gbenga Adewusi @bayowagbengaadewusiswagatv visited Baba Suwe on his hospital bed and having been briefed of the current situation, he initiated a SOS to Rev. (Mrs.) Esther Ajayi @love_of_christ_generation through Bro Biodun Paseda @abbeyway27 to see where the philanthropist can help Baba Suwe.
Immediately she offered to support with TEN MILLION NAIRA(10million naira) and his flight ticket to support whatever Baba Suwe had gathered in order to get thorough medical assistance quickly. She spoke to Baba Suwe and offered him prayers.

And early this Monday morning, she fulfilled her promise(Shai! some rich people don’t know Monday oh. No Monday excuse, wawu!). My sense of humour though. On behalf of Baba Suwe, his family, fans and colleagues, we say a big thank to our mother, Rev. Esther Ajayi for her USUAL KINDNESS, may you never fall. This will go a long way. We shall loose no time to facilitate the trip abroad at the instance of Medical experts in LUTH working tenaciously on getting Baba Suwe a huge recovery to enable him fly for that long haul with little or no risk.