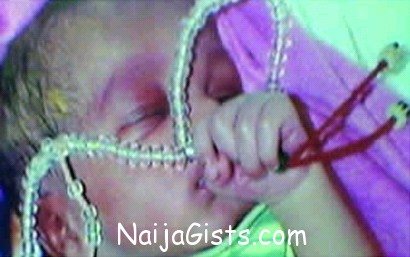 In what other called the sign of the end time, a baby has been born with an Islamic rosary aka Tesbau (Tesbeu/Tesbih) to a family in Ogun State Nigeria.naijagists.com

This follow the news of baby born with Quran in Lagos State Nigeria barely 3 months ago.

This bizarre birth took place in Sagamu, Ogun State Nigeria as a woman delivered a baby boy with Tesbih often called Tesbau / Tesbeu (an Islamic prayer rosary) on Tuesday August 28, 2012 at Rotoluwa Maternity home off Aiyepe Road at around 11:45pm at night.

A 35-yr old mother of 5 identified as Gbemisola Hamsat delivered the baby boy with tesbih on Tuesday, a delivery which has turned their residence at 2 Odujoko street off Prison road to a popular tourist location.

A traditional matron, Mrs Sarah Olurotimi Oloyede who was her birth attendant confirmed the story with reporters few hours ago.

Here is what the matron said:

“I heard a sound of something dropping into the bed pan before the placenta came out.

“It sounded as if it was an iron or something with weight that dropped on it and when I checked it closely, I saw a rosary covered with thick blood.”

According to her, she took the prayer rosary by the tail and examined it properly, all the clotted blood on it fell of leaving the shinning rosary.

She further stated that the boy’s birth was a miracle.

Oloyede said the boy held on to the rosary and did not allow anyone to remove it from him despite the fact that he was yet to open his eyes.

In his reaction, the Chief Medical Director of Ogun State General Hospital, Ijebu Ode, Dr. Wellington Ogunsanya, said there was no biological link of the story with the normal conception and baby delivery by a woman.

According to Ogunsanya: “Such claim could only be possible with the help of a third party who might have implanted the rosary into the woman while she was unaware.”

He said that such claims might be due to some women who inserted Intra-Uterine Device (IUD) through their vaginas into the uterus, adding that this may not necessarily disturb the growth of the baby.

Dr. Ogunsanya noted that in such cases, it was possible for the baby, during delivery, to hold on to or bring such an object out of the woman.

The CMD said that the case of a boy and a rosary being born by a woman had no correlation medically.

The medical doctor might be right, it’s possible a medical expert might have implanted the prayer rosary into the woman.

Anything is possible in this world of religious egotism.