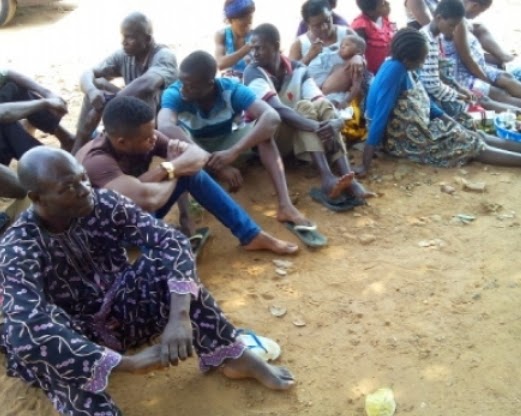 A baby making factory has been uncovered by Ondo Police command in Ilutuntun, Okitipupa LGA of Ondo.

The discovery was made on Wednesday. During the raid, command officials were pelted with sticks and stones. 21 people were arrested, including pregnant women and nursing mothers, and five children were found in a building owned by Mrs. Happiness Ogundeji.

Ms. Ogundeji was arrested along with her husband, Mr. Abiodun Ogundeji.

It is alleged by the NIS they operated the baby factory for years.

Ondo State Controller of the Nigerian Immigration Service (NIS), Musa Alhassan said they were given a tip about the illegal child trafficking and adoption syndicate by Command headquarters in Abuja, following weeks of surveillance.

Mr. Alhassan added that Imo Command had been on the trail of the suspect for years after escaping to Ondo State.

Mrs. Ogundeji described the allegations against her as untrue and said she runs a herbal clinic, and those who were arrested were her patients and servants.

Ogundeji also said she had several businesses including dredging sand and construction companies in Imo, Rivers and Ondo State.

Her husband, Mr. Abiodun Ogundeji said he is a civil engineer with Chevron in Rivers State and claimed no knowledge of his wife’s ‘baby factory’ business saying her businesses are construction, oil and gas.

One of the people arrested told Saharareporters nearly all of them were impregnated in Imo State and transferred to Ondo State.

The source said after giving birth, their babies were collected and taken away by ‘madam,’ and the whereabouts of their babies is unknown.

Many of the arrested people were unwilling to talk about the owner of the ‘baby factory.’

The suspects and her victims have been transported to National Agency for the Prohibition of Traffic in Persons and Other Related Matters (NAPTIP) office in Lagos as at the time sending this report.