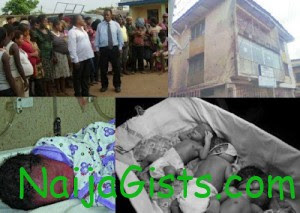 Another shocking baby making factory has been discovered in Rivers State Nigeria.

The discovery was made after an illicit trade arrest involving a couple.

The two we learnt specialize in kidnapping young girls and arranging them to get pregnant.

They would later hide the pregnant girls in their custody until they delivered.

“Rivers State Police Command had arrested one Chigozie John and his wife, Akwarama and rescued three pregnant women held as captives in the suspects place or residence somewhere in Akpajo.

“On interrogation, the husband and wife confessed to the offence of trafficking in new babies and further admitted that the three pregnant women found in their house were procured to deliver babies that would be sold as soon as they were delivered of their babies.” states Police Public Relations Officer Rivers state, Ben Ugwuegbulam

God have mercy!. These people are heartless