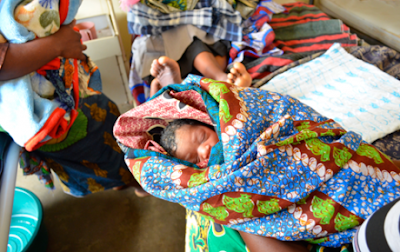 There is nothing as painful as nursing a pregnancy for nine months and losing the baby immediately after birth. That is the agony Mrs. Ezinne Chukwuemaka Osuji has been subjected to by those who stole her son a few hours after the baby was born on 5 June, 2013 at a ‘Maternity home’ in Nworiebi, headquarters of Mbaitoli Local Government Area of Imo State, the incident has generated a huge public outcry, prompting the arrest of the owner of Elizabeth Maternity Home, Mrs. Elizabeth Obi and her daughter by officers from the Police Divisional Headquarters who transferred the case to the Imo State Criminal Investigations Department and the child trafficking unit.

It is the worst form of treatment a mother could be put through in a so-called maternity home. It is not a surprise to many that this is happening in Imo State at a time girls are impregnated and their babies are sold after delivery to child trafficking syndicates that buy babies and sell them to make profit as if the babies are ordinary commodities that could be bought and sold in the open market.

The theft of Mrs. Osuji’s son could be the fallout of the crackdown on owners of ‘baby factories’ in the state who have resorted to another easy way of continuing with their evil trade by stealing new babies from maternity homes.

This should serve as a wake up call to expectant mothers about to put to bed, especially in private hospitals or so-called maternity homes, as dubious people could conspire with hospital workers to steal their babies. Expectant mothers in maternity homes must be suspicious of the sinister motives of the people around them so that they don’t’ end up facing the kind of trauma Mrs. Osuji is now facing.

Theft of babies may well be another form of kidnapping. If that is the case, owners of hospitals with maternity homes should improve security in and around their hospitals to prevent this kind of ugly incident from happening.

The police must not allow the Nworiebi incident to be swept under the carpet. They must get to the root of theft of Mrs. Osuji’s son and not only recover the baby but also bring the culprits to book.

Citizens of Imo State must prevent their state from becoming notorious for these kinds of sordid happenings. They must assist the police and other law enforcement agencies to stamp out baby factories and other despicable activities of criminals in the state. A society that places a great premium on moral values will not allow its people to descend to the level of stealing a day old baby and subjecting the baby’s parents to a harrowing experience.