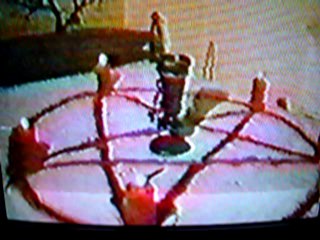 A 40-year old man, Ajadi Rafiu, has been charged to a magistrates’ court in Ilorin, Kwara State, northcentral Nigeria, for allegedly using a human being for sacrifice.

The accused, a resident of Magaji compound, Kehinde-Oroki village near Igbaja in Ifelodun Local Government Area of the state, who was suspected of using innocent citizens of the village for sacrifice, was alleged to have killed Okita Sunday of the same village to appease his great grandfather, who was the founder of the village.

According to the wife of the deceased, Mrs. Salome Okita, the accused, who was arraigned on a one-count charge of culpable homicide, was alleged to have criminally given a native concoction to her husband to drink, which caused him stomach ache and he eventually died.

Police First Information Report, FIR, on the matter revealed that the accused along with Alfa Dauda and Alfa Sule, both at large, intentionally administered poisonous concoction on the deceased thereby using him as sacrifice to appeasee their gods of twins.

The prosecutor, Sergeant Jubrin Al-hassan, prayed the court to remand the accused in prison custody pending completion of investigation into the matter and arrest of the other two accomplices.

Magistrate I.O.Olawoyin upheld the submission of the prosecutor and ordered the accused be remanded at the Federal Prison, Oke-Kura, Ilorin until 27 June when the case will come up for further mention.