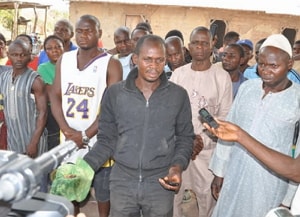 A 9 month old baby however survived the gory attack..

The killing comes 11 days after Danjuma indicted the armed forces of “colluding” with the killers, asking Nigerians to arm themselves and balance the terror, otherwise they will all die one by one.

The pictures of those murdered -a Kuteb-Jukun man and his wife with two of their kids, which went viral on the social media, looked gory, with multiple machete cuts.

Hon. Shiban Tikare, the Chairman of Takum local government council, also confirmed the killing of the four members of a family in a night attack.

Shiban disclosed that a nine-month old baby, however, “mysterious” survived the attack.

“The attackers invaded the village at night and slaughtered four members of a family who were deep asleep.

“We heard gunshots around 1:00am along Takum -Ussa road. While we were making efforts to mobilise policemen to the area, we heard sporadic gunshots at Mbikka Central, a community just at the outskirt of the town.

“By the time we got there, four people were slaughtered like chickens – a man, his wife and two children.

“A baby mysteriously survived the attack. The attackers whom we suspect to be Fulani herdsmen also attacked Basam, a village close to Rtd. Gen. Theophilus Yakubu Danjuma’s farmhouse, setting the entire village ablaze,” he said.

Shiban lamented that the killings were going on in the area, in spite of the extension of Exercise Ayem A Kpatuma (Cat Race) by the federal government.

According to him, instead of combing the villages to flush out the attackers, the army was busy brutalising his people in the town, adding that his people were disappointed with the exercise whom he said was not yielding the desired results.