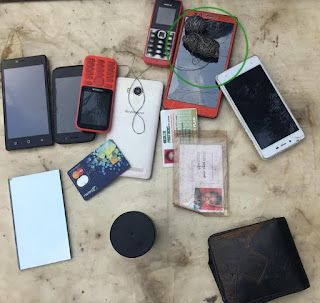 The directive of Lagos Commissioner of Police, Mr. Edgal Imohimi to officers of the command to keep eagle eyes at venues of gathering of people this yuletide yielded dividend with the arrest of a suspected pickpocket with seven stolen mobile phones belonging to gospel faithfuls that attended the annual musical concert tagged ‘The Experience’.

The suspect, Lateef Nurudeen of 10, Obadina Street, Lagos Island, was arrested by men of Rapid Response Squad in early December, 2017 at around 12:45 a.m. at the programme in Tafawa Balewa Square, Lagos.

Lateef, 19 years old, who was in company of his six other colleagues at the convention, was sighted holding a bag where he concealed the seven stolen phones. 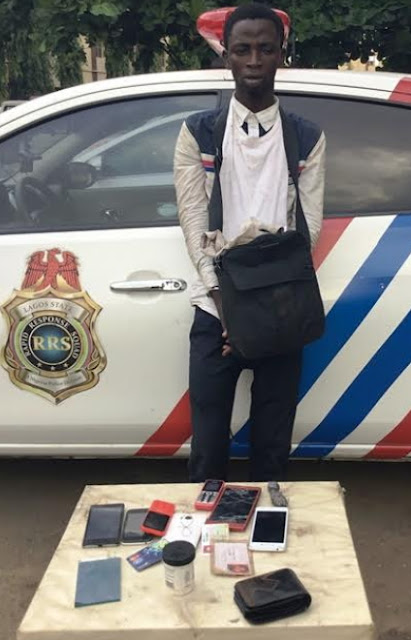 The suspect who on interception by the officers posted to the venue of the convention told the police on interrogation that he was a barber.

On further scrutiny, Lateef claimed that he saw the bag underneath a flower bed when he couldn’t give satisfactory answer about the contents of the bag.

The suspect, sources revealed, confessed to be the owner of the charms found inside the bag. Sources confirmed that he used the charms for protection.

Already, investigators have identified four owners of the seven phones. The owners, who reported at the RRS headquarter in Alausa were: Ukwajiba Felix, Ekhorelen Ruth, Kpanou Estelle and Kemi Ahmed.

The four owners reported at the RRS headquarters when officers called their relatives whose numbers were found on the stolen phones.

The owners who have been looking for their mobile phones before leaving the venue of the programme noted that they didn’t know when their phones were removed from their bags and pockets.

One of the owners, Ukwajiuba, stated that immediately he discovered that his phone was missing, he reported the theft at Zone 2, Onikan, Lagos, where his details were taken. 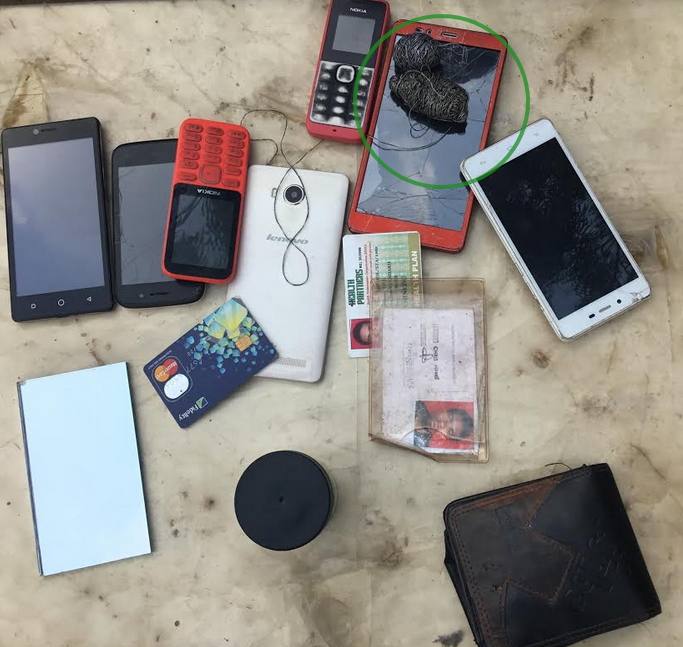 The suspect, Lateef, an ex – convict stated that he saw the bag inside the flowers at TBS but owned up to being the owner of the charms found inside the bag. He confessed that the two charms found in the bags were for his protection, adding that he came to the church programme to pray and not to steal.

Defending being in possession of charms at church crusade, he said, “I pray a lot. The charms are for my personal protection. They have been with me for ages. They were specially prepared for my protection against evil. I came to the crusade to pray.

My friends that took to their heels when police started questioning me are confirmed trouble makers. They were at the programme only to cause commotion. That is what they do and how they make a living.

I am a trouble maker too but I came to that church programme to pray and not to steal. My friends ran because they knew I would be arrested. I pray a lot and that was why I was at the programme’, he stated.

Efforts to track down the suspect’s friends who were with him at convention by RRS proved abortive as they have all abandoned their hide outs.

The Commissioner of Police, CP Imohimi Edgal directed that the case be transferred immediately to the Lagos State Criminal Investigation Department while effort be intensified to arrest all other suspects involved in the theft.

He ordered that the stolen phones be released to their owners once they can provide evidence of ownership.

[Official Press Release By The RRS]