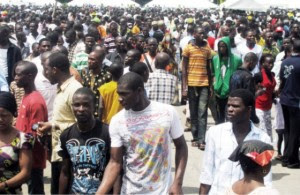 Such people now drive the most expensive cars in town and own mansions While graduates walk about with their degrees, certificates and potentials from one office to another seeking employments yet gets none.

They now look at the graduates as stupid jobless people that wasted their youthful strength and time in going to school.  Precisely, on the 24th of march 2013 some unemployed graduates came together, had a meeting @ Farai Hotel in yenagoa by 4pm and came up with an idea of a peaceful protest to let the state government know that they still exist and should not be forgotten.

To my greatest surprise, these unemployed graduates were arrested, put into the cell & after 3 days they were released on bail and  taking to court by thesame state government alleging them as rebells with rebellion motives. Who now defends them in court against the state government?

The case is still on! God help us. My name is Bernard Ebipade. From Bayelsa state. I have more information to give with facts. 08066327691