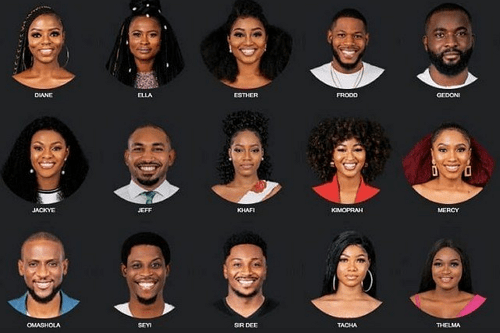 On the back of the nationwide fanfare that trailed the unveiling of BBNaija 2019, we have come up with a short biography & profile of each of the participating housemates.

On Sunday, June 30, 2019, the season 4 of the much-heralded Big Brother Naija reality show officially came alive. And the overexcited fans are keenly looking forward to get to know the housemates for this year’s edition.

In this article, we’ll be showing you succinct insights into the lives and careers of all the 21 housemates, aptly accompanied by their respective chances.

Who’ll become the next “Miracle”? Follow through this article to know more about these individuals.

Tacha is probably the most popular housemate, and for some reasons, she’s already seen by many as the favourite housemate for the prize money. She made a name as a “social media influencer”, with considerable followers on Instagram.

The 23-year old “slay queen”, who hails from the Niger-Deltan state of Rivers, adopts American rapper – Cardi B – as her role model. And she claimed that the star rapper has significantly influenced her lifestyle.

Would she emerge victorious in the end? We can but wish her the best!

Mr. Allison is not new to showbiz; he was crowned Mr. Universe Nigeria in 2018. He is a fast rising model, who seeks to use his craft and fame to promote unity, fairness and equity in the world.

Given Nelson’s relative popularity in the showbiz world, he stands a good chance of coming out top in this year’s edition of BBNaija. And Nigerians look forward to seeing him live on the reality show.

Victoria Nnabuchi, who is fondly called Ella, has been around the entertainment scene for years now. She’s made a name for herself as a TV Host and model, and she’s also made appearances in Nollywood,

Ella is a free-spirited lady, who is highly optimistic about life. According to the housemate, you can “faith it, till you make it”.

Would faith stand out her out and earn her the prize money? We’ll keenly following.

Jackye is quite a unique one! She’s spent most of her professional career as a tech expert, having led a team that won a multimillion Naira Fintech contract in software development.

Beautiful, bold, elegant and highly intelligent; Jackye ticks all the boxes. And all things being equal, she stands a good chance of becoming the next “reality star” of the show.

Tioluwa Daniel, fondly called Sir Dee, is a banker by profession, and during his spare time, he works as a graphics designer. He is a family-oriented personality, who gives and enjoys love from those he hold dear.

Sir Dee, 27, is a native of Kaduna State, and he’s one of the few northerners on the show; although, he’s very much a “southerner”, having lived most of his life down south.

Does he have what it takes to win the prize money? What do you think.

Saidat Balogun, fondly called Avala, is a musician and a businesswoman. She studied Music in York College, in the US. Avala’ s role model is American female musician – Mary J. Blidge.

According to the BBNaija 2019 housemate, Mary J. Blidge inspires her, and one day, she hopes to become a global music star, while following in the American singer’s footsteps.

Avala is highly optimistic about her chances, and while she’ll be competing against 20 equally or even better housemates, it’d be premature to downplay her chances.

Emeka Okoye, better known as Frodd, is a career sales executive and investment advisor. With a handsome face, a well-toned body and a calm voice, Frodd is obviously one of the housemates to look out for in this year’s edition of BBNaija.

Does he stand a chance of claiming the prize money? He definitely does.

Isilomoh, 27, is a corporate lackey, who specializes in Human Resources management. She is the outgoing type, and likes to hangout with friends and loved ones.

According to the 27-year old HR manager, she’s looking to use the reality show’s platform to propel her career in the media and entertainment industry.

Thelma Ibereme is characterized by a mild and simple personality. She’s of the view that “everyone around you should be able to add value to your life, one way or the other”. According to the housemate, she despises hypocrites and scandalous individuals.

Thelma, 26, is a Hair Stylist and Beauty artist, and she owns a beauty line where she practices her craft. During her off-time, she reads novels, particularly the inspirational ones.

Jeff is a career banker, who is a strong advocate of “gratitute”; he believes that people should always show gratitude to their benefactors.

Although, the handsome housemate is an Igbo man of Anambra descent, he fancies Yoruba delicacies a lot. The housemate, in his bio, emphasizes his love for Amala & Gbegiri/Ewedu, which is a typical Yoruba delicacy.

At 30, the banker is obviously one of the oldest in the house, and he also stands out as one of the favourites for the prize money.

Diane is an easy going individual, with a simple philosophy. She claims to be an open-minded fellow, who adjusts easily to circumstantial dictates of life, having lived most of her adult life as a stranger in far away Hungary (as a student and worker).

Ms. Yashim, or rather Diane, is a model, and she hopes her exploits on BBNaija would further speed up her penetration into entertainment arena, particularly Nollywood.

Diane’s personality is quite likable, and she’s certainly won over some fans already.

Olaoluwa Esther Agunbiade is a 22-year old lawyer, who got called to bar at a relatively young age of 21. She is typically what you can call “beauty & brain”. And she’s always open and proud of showing off her sexiness and intellectual capacity.

Esther is an all-rounder, and she’s definitely one of the housemates to look out for.

Tuoyo fits the profile of a typical Reality Show star. The 23-year old is a Fitness Advisor and Psychoteraphist. And during his off-time, he puts his appealing physique to work, as a “stripper” nonetheless.

Tall, big, athletic, bearded and good-looking, Tuoyo has obviously earned himself a significant number of female fans, and this, of course, stands him out as one of the housemates to look out for.

You might want to ask: what would a Police Officer offer in a show like BBNaija? Well, I don’t mean to surprise, the Khafi you’ve, so far, been fascinated about is actually a career Police Officer.

The beautiful housemate, whose real name is Kareem Khafilat, is from Ekiti State; however, she lives and works in the United Kingdoms.

One interesting and unique thing about this lady is that; while others would do just about anything to make headway on the show, Khafi has set a limit. According to the housemate, she’d quit the show immediately, if she’s forced to do anything sexual.

Speak of a woman with value; speak of Khafi! She’s obviously one to look out for.

Sheyi is a typical Nigerian, with a not-so-rosy childhood, but he’s somehow created something out of little, with his fast rising business line. Rumours have it that he is a grandson of Nigerian political icon – Obafemi Awolowo.

The 30-year old entrepreneur is a devout Christian, and he has a tattoo inscription of “Jesus” on his body. While this may seem unbiblical to many, the housemate’s motive seems “christ-like”.

Sheyi looks to stand out from the rest of the pack, and take home the prize money.

Would he be successful? We’ll all see about that.

This lady is not a stranger to the limelight, having represented Nigeria at the global beauty contest tagged – Miss Intercontinental World Beauty Pageant. Aside being a successful model, Kim-Oprah is also a TV Host/Presenter, and she has handled a number top TV Shows.

Kim-Oprah is, no doubt, one of the housemates to look out for in this year’s edition of Big Brother Naija.

Mike is a typical “big boy”, and he’s arguably the richest housemate on the show. He’s a seasoned businessman and the owner of a cigar-production firm based in UK. Aside being a successful entrepreneur, Mike is also a professional athlete.

By all standards, Mike, no doubt, stands out as one of the favourite housemates to win the prize money.

Mercy is a popular model and video vixen. She has spent most of her adult life behind the camera; so, the attention is not new to her. Nevertheless, she look forward to setting up her own fashion line, and she hopes BBNaija would further speed up her progress, towards achieving her dream.

As an enthusiast of the reality show, you might want to look out for this “babe”.

Gedoni, 31, is a stylist and fashion designer, who hails from Cross River state. He is also skilled at drawing life-like portraits; a skill he aptly applies in his fashion design work.

As a fashion designer, Gedoni hopes to win the prize money, to further expand his fashion line.

Omashola is a Lagos-based model and businessman, who hails from Delta State. The housemate, like the most of his colleagues, is looking to ride on the platform of BBNaija to kickstart a career in the Nigerian entertainment arena.

According to Omashola, his girlfriend (now ex) recently rejected his proposal, and this has further fired him up to succeed at all cost on the show.

Ikechukwu Onyema, fondly called Ike, is a flamboyant personality, who loves the fast life. The housemate hails from Imo State, but shuttles between Nigeria (Lagos) and the US.

He’s a businessman, who moves around a lot. And he hopes the prize money would help him expand his business, should he come out top at the end of the reality show.

There you have it! Which of the 21 housemates is your favourite? Kindly share your opinions with us in the comments section below.