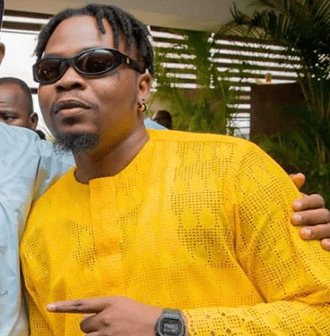 ‘Baddosneh’ On Tuesday announced the birth of his second child, Tunrepin Myles Adedeji with his fiancé of over five years, Bukunmi Aisha Suleiman in Maryand, U.S.A.

The rapper took to his Instagram page to announce the birth, with a photo of himself carrying the baby.

He also captioned the photo quoting the name of the baby, Tunrepin Myles Adedeji.

Although Maria’s pregnancy was rumoured a few months ago, it was later confirmed by a close friend of Maria.

The source disclosed that the MTV Shuga actress had entered into a romantic relationship with Olamide with the belief that he was single and separated from his baby mama.

“Olamide told her he was single that’s why she began a relationship. They loved each other,” the source revealed to Pulse Ng.

The affair between Maria and Olamide wasn’t planned to be short-lived, however, it began to fade away when Maria found out that the YBNL boss was still with his baby mama and long-time partner, Bukunmi Suleiman.

“They broke up because she found out he was still with his baby mother,” Maria’s close friend told Pulse.

However, it was too late to turn back the hands of time as Maria had gotten pregnant. “Later she found out she was pregnant.”

The source also disclosed that after Maria found out that she was pregnant with Olamide’s baby, Maria reached out to him for mutual discussion and agreement.

“They discussed options. He said the decision is hers. She kept it and they planned to co-parent from the beginning,” Maria’s friend informed.

After discussing with Olamide, Maria resigned her appointment with Beat FM and moved to London.

This move, her friend said, wasn’t solely her decision. “Her parents took her to London because they thought that was the best.”

Unknown to many, Maria had to battle to save her life and that of her pregnancy after relocating to London in 2019.

Her friend said: “That (relocating to the UK) was a blessing because not long after, she was admitted to hospital with serious dangers to the pregnancy.

This has resulted in her pregnancy being labeled a “high-risk pregnancy” by doctors which is why she is still in London as she is monitored every week.”

Maria’s friend went on to say Olamide was notified of the development after which he sent money to the pregnant OAP.

“He (Olamide) sent money for the baby when she came out of the hospital in March (2019). That is the only time he sent her money – which was to start buying baby things.”

Since rumours of the pregnancy broke, some Nigerians have gone to twitter to accuse Maria of ‘trapping’ Olamide.

However, Maria’s friend explained that the actress and producer would not respond to insults and snide remarks as she needs to focus all her energy on delivering her baby in good health and condition.

“My friend won’t speak because she needs to rest before the baby is delivered. She also knows better than to have her baby reading negative things in the future.

“Therefore she will not respond to insults. We are looking forward to her first child and so is the father,” she told Pulse.

In 2018, Olamide hinted at his decision to marry Bunkunmi by proposing. (NAN)