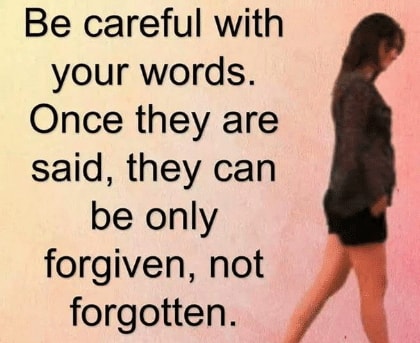 Eminent Scholar and literary giant, Professor Niyi Osundare once said, “To utter is to alter”. Words have the inherent power to alter people’s mood, countenance and even change the course of destiny! When people take words casually, they mostly end up becoming casualties in life. Cindy Trimm said,

“Words released into the atmosphere do not disappear or dissipate. They have no geographical limitations. Words have power, presence, prophetic implications. They create a magnetic force that pulls the manifestation of what you speak – good, bad or cursing-from other realms, regions, and dimensions. They are suspended and incubated in the realm of the spirit awaiting the correct time and optimum condition for manifestation”. Words don’t die, and long after they’ve been spoken can perpetually influence the victim for the rest of his/her life.

We need to sincerely and continually do what I will like to call ‘Word Audit’. There are words and conversations that we keep having daily that are actually killing intimacy between us and our spouse, children, co-workers, family members, business associates and loved ones. What kind of words or conversations are putting your relationships at-risk? Take responsibility for your words and utterances; don’t let your utterances be the reason you don’t succeed in life and relationships.

There’s a conversation you’re having every day, sometimes several times a day, that may be creating distance between you and those you love. If you sincerely and genuinely take time to ask people, they will accurately tell you!

Have you ever heard of ‘Psychosomatic’ medicine before? In 1910, Emil Cove, the Swiss doctor, achieved remarkable cures when he came across the idea of teaching patients at his clinics in Geneva to repeat the words, “Every day in every way, I am getting better and better”, as a way of curing certain ailments that have defy series of drug therapy.

This repeated affirmation brought amazing improvements in people suffering from every kind of illness. Soon, doctors and researchers were coming from all over the world to study the incredible results of what came to be called psychosomatic medicine.

Ex-Indian President, Dr. Abdul Kalam used one of his childhood stories to emphasize the power of words.  He has this to say: “When I was a kid, my Mom cooked food for us. One night in particular, when she had made dinner after a long hard day’s work, Mom placed a plate of ‘subzi’ and extremely burnt roti in front of my Dad.

I was waiting to see if anyone noticed the burnt roti. But Dad just ate his roti and asked me how my day was at school. I don’t remember what I told him that night, but I do remember I heard Mom apologizing to Dad for the burnt roti. And I’ll never forget what he said: “Honey, I love burnt roti.”

Later that night, I went to kiss Daddy, good night and I asked him if he really liked his roti burnt. He wrapped me in his arms and said: “Your momma put in a long hard day at work today and she was really tired. And besides, a burnt roti never hurts anyone but HARSH WORDS DO!” Watching what we say is the most important test of how enlightened we are. I have often said that the way we talk to others is the core evaluator of how educated we are! Your words should build, empower, encourage, motivate and inspire others.

In our journey through life, we will definitely go through harsh circumstances; every harsh memory will eventually fade away but not harsh words! Words like worthless, stupid, loser, idiot, moron, good-for- nothing, scum, cheap, ugly etc., have weighty and far-reaching consequences on the victim. I am a firm believer in the power of words, not only because religions and psychology affirm it, but my own life has been a product of the blend of the good, the bad and the ugly words spoken randomly at me.

One of the sporadic rise to fame in the entertainment industry is the story of Michael Jackson, but unknown to many, Michael’s demons were not from the ‘spiritual’, they were his father’s words. While the world was reveling and being mesmerized by Michael’s songs and dance steps, he was actually struggling with childhood demons inflicted through his father’s words! Jackson and some of his siblings said they had been physically and psychologically abused by their father when they were young.

Michael’s father cruel remarks about his face caused him to want to completely alter his looks.

His father, Joe Jackson subjected little Jackson to verbal abuse, told his son repeatedly that he had a ‘big nose’ and made fun of Michael’s skin condition as a teenager. Michael said that sometimes when his father walked into a room, he would be so afraid of him that he would vomit, and anytime Michael looked into the mirror, he was unable to see how richly endowed his face was, the only thing he saw back then was his big nose, then he made up his mind to face it off. In the middle of tinkering with his nose, Michael lost his self-image; he lost his face and eventually lost his life!

The use of derogatory names such as “big nose” by Michael’s father due to Michael’s nose size initiated a personality disorder that later brought upon the young Michael a psychological condition that got him addicted to people’s concept of how his physical appearance was perceived. Jackson destroyed this natural good look because he never wanted to look like what his father normally call him. His father literally inflicted him with self-hatred and self-mutilation.

No doubt, as a result of such belittling of his appearance, Michael Jackson, as he grew older became obsessed with reducing the size of his nose. He further tinkered with his looks. He began making steady rounds to the dermatologists to bleach out the black of his African-American skin until he became white. Although Jackson was diagnosed with the skin disorder Vitiligo, it was also widely speculated that the change was due to his childhood affirmation of never wanting to look like what his father always call him. Unguarded words from parents can trigger a lifetime war within a child!

It is amazing how the words of a parent can significantly change the direction of a child’s life. It is sympathetic to know that the acclaimed king of Pop was reduced to nothing by just two words from the man he loved and feared dearly! Imagine, two words (Big Nose) made the acclaimed king of pop died like a ‘pauper’ as his controversial personal doctor attested that Michael actually begged for death in his last moments!

It has been ascertained that the life of a child is fully formed from the words they hear between the ages of one to seven years! If there is something that exert so much influence on children in their formative years, it is the words they hear.  Many years after, these words will keep ringing in their heads. Peggy O’ Mara said, “Watch what you say, for the way we talk to our children becomes their inner voice”. Most people that attempt committing suicides have always attached it to some voices in their heads from past experiences or conversations!

One of the greatest scientists of all times, Albert Einstein did not have a rosy walk to stardom. He had the most damning report from the same people that were entrusted to build him up. Albert Einstein was unable to talk until he reached the age of 4, and even when he started talking, he was slurry and incoherent in speech. When the professor who revolutionized Physics with his General Theory of Relativity was 16 years of age in 1895, his Munich schoolmaster wrote in Albert Einstein’s school report;

“He will never amount to anything”. Einstein’s father, Hermann Einstein even took the courage to challenge the teacher to reverse his verdict but ended up getting more venomous verdict when the teacher looked straight into his eyes and said: “It doesn’t matter what he does, he will never amount to anything.”  This was a damning report from the head of his Munich school in Germany. Within ten years of this woefully inaccurate prediction, Albert’s colossal intellect was already beginning to unlock the secrets of the universe. In time, he became the foremost mind of the twentieth century.

Parents! You have to be mindful of the word that comes out of your mouth, yes you have! The words of a parent to a child between ages 1- 7 form their foundation – the foundation of a man’s life has a factor of the parent’s utterances in it. The worst kinds of parents are those that don’t know how to use their tongue! Parents should avoid cursing and ridiculing words.

Children will surely make mistakes, we all do! When we yell at children for making mistakes, we ultimately kill their ability to innovate. Mistakes and errors can become spring board to greater height if we take ample time to brainstorm instead of ‘blame-storming’. Henry Ford said, “Failure is simply an opportunity to begin again, this time more intelligently.” We are not perfect; we have flaws, and we make mistakes.  These characteristics do not make us worthless, they make us worthy.

Children must be made to know that mistakes are integral part of the learning process and should not always receive bitter words every time they flounder. Mahatma Gandhi said, “Freedom is not worth having if it does not include the freedom to make mistakes”.

Whether in relationships, organizations, businesses, we must create the atmosphere for people to make mistakes and learn from it. The consoling truth is that mistakes are the only infallible evidence that we are human!

We need to discipline and restrain ourselves from pouring out vituperations on others when we are angry. Someone once said, “Don’t ruin other people’s happiness just because you can’t find your own”. You need not talk when you are angry, people can even take it for granted but never mind. Abraham Lincoln said, “Better to remain silent and be thought a fool than to speak out and remove all doubt.”

Always say the right words, no matter what the situation is! William Makepeace Thackeray said, “Never lose a chance of saying a kind word.”

QUOTE OF THE WEEK: “You never know when a moment and a few sincere words can have impact on a life”-Zig Ziglar