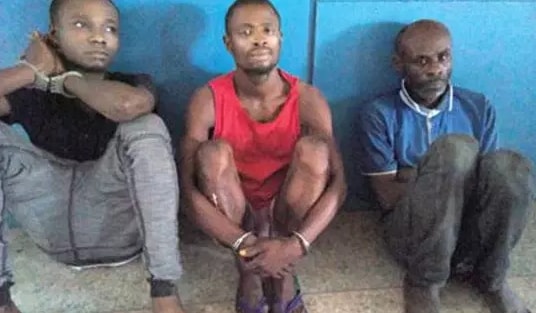 Confession Of 3 Men Who Killed Their Girlfriends In Edo State

19 year old Shaba, who regretted his action which he described as a mistake said he abandoned the corpse of his girlfriend by the side of the road when he sighted vigilante men on patrol near the scene of the crime.

He said, “At about 11 pm when I got home on the fateful day, I saw my girlfriend Matilda Odiri at the gate waiting for me so I took her in. While peeling the orange she bought for me she started complaining that I used to keep late nights and that sometimes I would not even come to the house.

She also accused me of keeping another relationship. As we were arguing she wanted to use the knife to stab me so I collected the knife from her and in the process I mistakenly stabbed her on her breast and she fell down.

I was in shock when I realized what had happened seeing my girlfriend bleeding. I them carried her with the hope of taking her to the hospital but as I was walked down the street I saw flashes of torchlight and gunshots fired by some members of vigilantes so I dropped her body and ran away. Someone called me in the morning that a large crowd had gathered around the corpse of my girlfriend. My fathered then called that I should report myself to the police station in Aduwawa. I’m feeling very bad, it was like a nightmare, it was never my intention to kill her.”

I killed my lover for squandering my money—Ogbeije

On his part, 30 years old Alexander Ogbeije was arrested for allegedly killing his lover who police identified as Mercy Okoh, 27 years with a cutlass in a farm in Uronigbe, Orhionmwon local government area and allegedly hid her corpse at the base of a plantain tree. He told journalists that he was from Abavo community in Delta. Narrating how the incident happened, he said “we normally farm in Uronigbe in Orhionmwon local government of Edo state.

I was able to save money for three years after the sale of my crop proceed. I then called my girlfriend and gave her N576,000 to keep that it was the money we would need for our wedding and invest whatever was left for her provision business. Three days after I gave her the money she started behaving funny.

I later discovered that she had spent the money and when I asked her she admitted spending the money. Each time I asked her she always threatened to kill me so I reported the matter to her family. I went to her brothers to inform them about the money but instead I was attacked by some thugs so I had to escape. One day, I was at the farm and suddenly she appeared and started making trouble with me, shouting on top of her voice. It was when she slapped me severally that I got angry and hit her with my bare hand and she fell on the ground and died.

I found condoms with her on several occasions —Iduwanyi

Another murder suspect paraded by the police, Osaremwinda Iduwanyi allegedly killed a mother of three, Gladys Okoh for alleged infidelity. The deceased was a divorcee. The police commissioner said Iduwanyi stabbed his victim severally “on the stomach, back-side, ribs and private part with a knife. The suspect accused the victim of infidelity having discovered condoms in her handbag”

According to Iduwanyi, “What happened was a mistake, I never did it intentionally. We were living together with a promise to get married.

We were serious in the relationship. I had earlier warned her to desist from receiving phone calls from his male friends and she promised to stop it. One day she said I should give her money to start business and I had to sell my car for N250, 000 and gave her N150, 000. She travelled to Lagos and used the money to and buy personal clothes and the next day I reported the matter to the brother that I had to sell my car because of her and now she used the money to buy clothes for her personal use.

“On the day that I killed her, I saw her with my mother quarrelling accusing my mother of gossiping about her which my mother denied. She immediately went into the house and parked her things that she was leaving. I had to allow her go but the next morning I went to her and begged her to stay. She pushed me away that I should go and meet my mother. She said my mother was responsible for my frustration.

I saw her getting dressed preparing to leave and when I pleaded that she should stay she pushed me away and we started fighting. There was a knife very close to her which she picked up and wanted to stab me but I collected it from her and stabbed her in her abdomen several times. I ran away by jumping through the fence. I also found condoms with her on several occasions.

My wife and two children were in Italy. I came to Benin because of my father’s burial . I pray to God to forgive me. It was not intentional.

The Commissioner of Police in Edo state, Kokumo Johnson also paraded 12 suspected kidnappers who he said at different times and locations kidnapped, robbed and killed their victims and made away with their valuables.

He said a 24 years old Joshua Nwanze, the house help of one Anyamekhue Collins Edokpolor was arrested for surreptitiously trying to kidnap his principal’s child.

Continue Reading
You may also like...
Related Topics:girlfriend, italy based, killed, nigerian

Video: Woman Fights Off Robbers Attempting To Snatch Her Car In Birmingham UK
Be Mindful Of Your Words: What You Speak To Others Becomes Their Inner Voice!