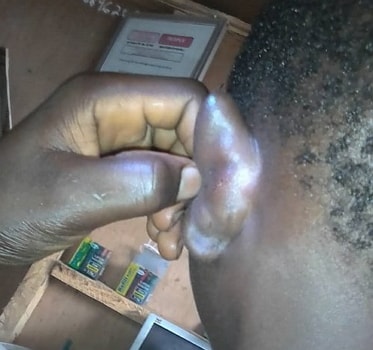 An 11-year-old old Beninese boy subjected to slavery and tortured has been rescued from a woman in Lagos.

The victim identified as Tunde was said to have been subjected to series of physical abuses, by the person who brought him from Cotonu in Benin Republic to Ikotun.

It was gathered that about 15 policemen from Ikotun and Igando Divisions on Friday stormed the house the victim was being held after a report from the Child Protection Network (CPN).

A woman whose identity was yet to be ascertained, was said to have resisted the policemen and CPN volunteers from entering her home until one of her children climbed upstairs and opened the door.

According to the Coordinator of CPN, Ebenezer Omejalile, it took the team over four hours before the woman’s door was eventually opened by her son.

“Upon receiving this report, we went to Ikotun Police Station and two officers went with us to the woman’s address.

“When we got there, we introduced ourselves to the woman and her son, stating our mission. The woman started shouting that we cannot come into her house for any reason until we tell her who reported her.

“For the next four hours, we were still there. She locked her door. Igando poloce station was invited for reinforcement. About 15 policemen on uniform came to the place and she refused to open the door still.

“The Police Command’s Public Relations Officer (PPRO) was informed and he tried to cajole the woman but she was still rude and refused to open the door.

“So, some officers went to call the Divisional Police Officer (DPO) Igando and then, one of her sons, who was downstairs, climbed up and opened the door.”

Omejalile said the DPO interviewed the woman and recorded her statement, adding that she refused to follow the police to the station on grounds that she couldn’t move her legs.

“Her son followed us. The young boy Tunde has been rescued and placed in public shelter. The police are investigating the case and we hope that the suspect would be charged to court.

“It is clearly a child trafficking case across the border. The victim was subjected to all kinds of abuse.”