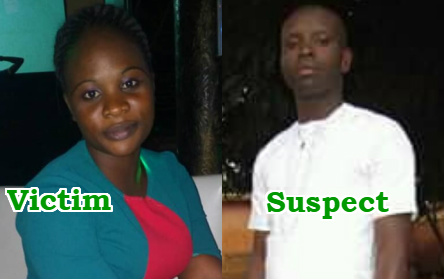 A Beninese man has been arrested in Cotonou Benin Republic for allegedly killing his ex wife and using her blood for money ritual.

According to several online reports, the lady pictured here recently delivered a baby for the monster on the right but they separated due to attitude problem on the part of the man.

The man who is said to be a ritualist reportedly called the lady and asked her to come over to his place so they can talk about their newborn baby.

She reportedly left home on the fateful day, only to be slaughtered by her ex who cut a deep hole in her neck and collected her blood for money ritual.

Though he initially fled after the murder, he has been caught by the police.

In Abia, Couple Killed In Fatal Accident 3 Days To Daughter’s Wedding
Photos: 2 Brothers In Street Fight Over Land In Sapele Delta State..One Stabs The Other On The Neck