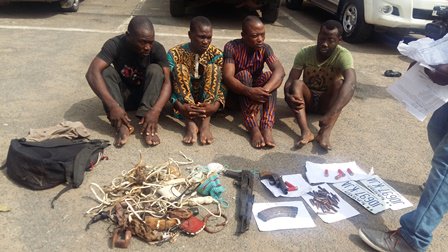 A native doctor from Benin Republic today admitted that he was a member of a trans-border robbery gang who specializes in snatching exotic vehicles in Nigeria and moving them to Cotonou in Benin Republic.

He was today paraded alongsides 3 members of his gang by Lagos Police Commissioner Imohimi Edgal.

He said the gang usually pay him N15,000 to smuggle weapons into Nigeria through the bush,adding that he had been responsible for making charms for the gang over the years to ensure they return successfully from any operation.

“They came to my place in Port-Novo to collect charms to protect them during robbery. I collected CFA 30,000 for the charm. I have also helped them to cross arms through Idiroko for N15, 000 per transaction. I have only done that twice. The charm protects them and opens the way for them. I was arrested at Mile Two.”

One of the suspects, Hammed said:

“It was polo who called us to come and rob this year. We have robbed twice – two cars. It is a car dealer that collects the vehicle and he gives us anything he feels like. He is the one who gives us the guns. He is my chairman. For that Prado, he gave us CFA300, 000.”

The suspects met their Waterloo around 9pm on the 20th of January 2018 when they snatched Prado SUVs belonging to one Fidel ONwodi and Olayinka Oyebola in Victoria Island and Ikoyi respectively.

They were caught in their hideout by the tracking devices attached to the Sports Utility Vehicles.

Gbarada: Nigerian Cinema Movie By Muyiwa Ademola Completes, Premiere Loading….
Why Most Christians Are Unaware They Are Worshipping Idols